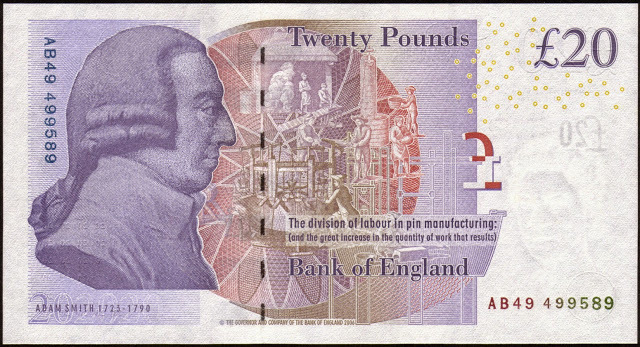 Free market economist Adam Smith will be taken off the British  £20 note soon, and part of the reason is a "public outcry" there aren't enough women on the currency.

A two-month period of public nominations will seek a successor to Adam Smith, the Scottish economist, for a new banknote to appear in three to five years.

Mr Carney said on Tuesday that the bank was seeking suggestions for someone to recognise British achievements in the visual arts.

Public nominations were introduced following an outcry after the bank decided to replace the £5 note featuring Elizabeth Fry with one depicting Winston Churchill, leaving no UK banknotes recognising the achievements of women.

That error was hastily rectified by Mr Carney when he became governor in 2013 by accelerating the introduction of a £10 note featuring Jane Austen, which will enter circulation in the second half of 2017, a year after the new £5 note...

Mr Carney said: “There are a wealth of individuals within the field of visual arts whose work shaped British thought, innovation, leadership, values and society and who continue to inspire people today. I greatly look forward to hearing from the public who they would like to celebrate.”

I guess Queen Elizabeth II doesn't count towards the diversity quota. Of course, there are plenty of British women who could be suitable subjects to be featured on British currency, notably Elizabeth I or Queen-Empress Victoria.

But the "artistic person" proviso is dangerous because of how catastrophically art has suffered in recent decades. Let's hope this selection is something akin to Jane Austen and not a British version of some affirmative action "artist" like the late Maya Angelou.