The Great Wall of Texas: How the U.S. Is Repeating One of History's Great Blunders

Today's immigration debate has an eerie precedent in the mistakes that brought down great empires from Rome to Britain.

Before their empire fell, the Romans built walls.

They began by erecting barriers along the border following the death of the Emperor Trajan in 117 A.D., notably Hadrian's Wall, which belted Britain. 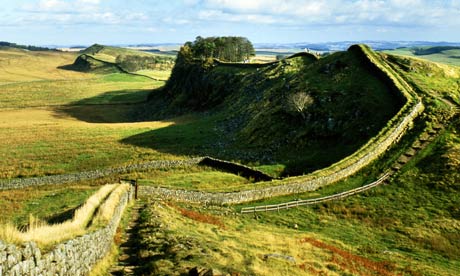 ... Despite the cautionary tale of Rome, building walls, both literal and figurative, has remained a habit of great powers in decline — the fateful course taken not only by Ming China, but also Soviet Russia, and even Great Britain.

Sadly, many Americans are all too eager to repeat history.

Witness the immigration bill slowly making its way through Congress, and the feverish reactions it has inspired.

... The real dilemma for American growth is not ignorance about good economics, but the quagmire of bad politics. Simple-minded protectionism in terms of trade or migration is being exploited by populists in both major parties. What our leaders need to understand is that the only existential threat facing America is not embodied by barbarians at the gates, but by American isolationism. To continue the miraculous American growth story, we need to continue the traditions of constant innovation, diversity, and openness to the world.

The last thing we need is a wall.

Let's take a look at Hubbard's notion that building Hadrian's Wall in about 122 A.D. demonstrated that Rome was "in decline." The history of the Roman Republic was largely one of massive land-based piracy. Every year the legions would march out to inflict horrific violence on somebody, take slaves and tax their land. Eventually, after Augustus became the first emperor in 28 B.C., especially after his legions were destroyed in the forests of Germany, the emperors tended to feel that Rome had conquered most of what was worth conquering. For example, Hadrian, an energetic and competent ruler, appears to have felt that owning England was nice, but Scotland wasn't worth the trouble. (The next emperor built the Antonine Wall 100 miles north to protect his conquest of the Scottish Lowlands, but later emperors abandoned even southern Scotland as unprofitable.)

So, indeed Rome was "in decline" in the second century A.D. under the "five good emperors"—an era that Gibbon claimed in 1776 was the happiest in human history—in the sense that Rome wasn't out waging war in, say, the Scottish Highlands or Russia or Chad or the Empty Quarter of Arabia.

Edward Gibbon began his account of The Decline and Fall of the Roman Empire with the famous judgment that for humanity, the second century A.D. was as good as it had ever got:

If a man were called to fix the period in the history of the world, during which the condition of the human race was most happy and prosperous, he would, without hesitation, name that which elapsed from the death of Domitian to the accession of Commodus. The vast extent of the Roman empire was governed by absolute power, under the guidance of virtue and wisdom. The armies were restrained by the firm but gentle hand of four successive emperors, whose characters and authority commanded involuntary respect. The forms of the civil administration were carefully preserved by Nerva, Trajan, Hadrian, and the Antonines, who delighted in the image of liberty, and were pleased with considering themselves as the accountable ministers of the laws.

But Glenn Hubbard, the chairman of Council of Economic Advisers under George W. Bush, knows better than Gibbon: the Roman emperors of the second century weren't invading the world and inviting the world enough. The Emperor Hadrian was insufficiently imperialist to satisfy modern economists' lust for centralized power and dominion.

By the way, here's Columbia B-School dean Hubbard being interviewed in Inside Job about his numerous financial conflicts of interest: