Support for Muslim Brotherhood Is Expressed in Paris—and Chicago

The excellent blog IslamVersusEurope translates articles from the non-English press about the spread of hostile Islam across the continent. A recent post noted the demonstration — in Paris — supporting the Muslim Brotherhood and Egypt’s recently deposed Mohammed Morsi.

Shocking stuff to be happening in the capital of France, is it not? We are fortunate that support for the terrorists-in-suits organization does not occur in America.

Oh, wait! An estimated 500 persons showed up in Chicago on Sunday to cheer for the Muslim Brotherhood, a group which supports the persecution of Egyptian Christians. As a result, the Coptic Christians have backed the Egyptian army’s actions against the Brotherhood government. 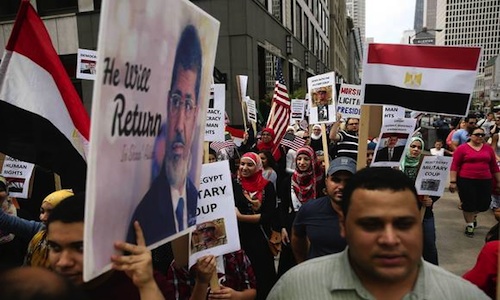 Naturally, the hopeful press focused on the democracy aspect, not the unfriendly nature of Morsi’s party.

At Chicago rally, a call for democracy in Egypt, support for Morsi, Chicago Sun Times, July 7, 2013

Thousands of miles away from the turmoil in Cairo, a group of about 500 people gathered Sunday on North Michigan Avenue to rally for democracy in Egypt.

People in the group waved Egyptian and American flags and chanted, “Bilaadi, bilaadi, laki hubbi wa fu’aadi” — “My country, my country, you have my love and my heart” — the first line of Egypt’s national anthem. Men, women and children came together in front of Egypt’s consulate, 500 N. Michigan, and held up signs that read “Support legitimacy, democracy & human rights” and “Morsi is my legitimate president.”

Former president Mohammed Morsi was pushed out of office Wednesday, after only one year in the job, by Egypt’s military. Egyptians started protesting against Morsi and the Muslim Brotherhood in Tahrir Square at the end of June, more than two years after the widespread demonstrations that led to the end of the Hosni Mubarak regime.

Rally organizer Ahmed Taha, of from Egyptian Americans for Democracy and Human Rights, said the purpose of the rally was to draw attention to the fact that Morsi was democratically elected and should remain in office until he is voted out.

Rally attendees, most Egyptian Americans, said they weren’t necessarily in support of Morsi or the Muslim Brotherhood, but rather the democratic process.

“Any president who came after the revolution would be in the same situation as Morsi,” said Salwa Ahmed, an Egyptian who has lived in Chicago for more than 20 years. “He can’t fix everything in one year. He should have at least four years to try, like in other democratic countries.”

Amro Tharwa, an Egyptian-American pharmacist from Alexandria, Egypt, said some of his family and friends in Egypt have stopped speaking to him because of his views on the recent protests.

He said they think that he’s not supporting democracy and is supporting Morsi. “They have forgotten that I used to make fun of him,” said Tharwa, 33. “I’m not a radical, I’m not part of the Brotherhood. I’m wearing a Captain America T-shirt.”