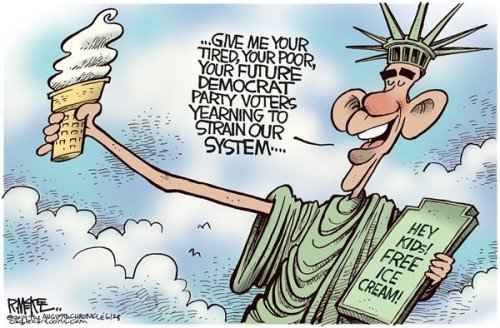 Hinderaker In POWERLINE: "The Camp Of The Saints Is Here"

John Hinderaker of the Powerline Blog had better watch it, or Conservatism Inc. might take his membership card.

Apparently, Hinderaker has figured out that continued Islamic immigration will doom Europe, and thinks along the same lines about Mexican immigration to this country.

Concludes Hinderaker in a recent Powerline post, "The Camp of the Saints is here. Not someday, but right now."

We await the obligatory designation of Powerline as a "hater" because he has read, we are led to believe, that "racist" novel.

Hinderaker also points to a piece from The Associated Press that begins as follows:

Nearly a year after the Obama administration launched a massive public relations campaign to dispel rumors of a free pass for immigrant families crossing the border illegally, internal intelligence files from the Homeland Security Department suggest that effort is failing.

Hundreds of immigrant families caught illegally crossing the Mexican border between July and September told U.S. immigration agents they made the dangerous trip in part because they believed they would be permitted to stay in the United States and collect public benefits.

The interviews with immigrants by federal agents were intended to help the Obama administration understand what might be driving a puzzling surge in the numbers of border crossings that started over the summer.

No one in the Obama Administration is unclear about what invited this toxic flood of Third World humanity. It's the amnesty.

Creating the flood is why Obama promised it. He wants to brown the country and create a permanent Democratic majority.