Wouldn’t you know it? The drunk accused of killing Indianapolis Colts linebacker Edwin Jackson is a twice-deported illegal alien. In Schumertown, he’s called a DREAMer. 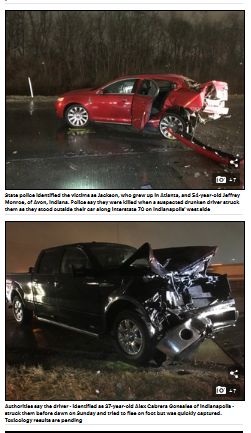 The man accused of killing Indianapolis Colts linebacker Edwin Jackson and another man is a Guatemalan immigrant who was in the country illegally and using an alias, according to police.

Manuel Orrego-Savala told police his name was Alex Cabrera Gonsales when he was arrested Sunday morning after allegedly ramming a black Ford F-150 pickup truck onto the emergency shoulder of an Indianapolis highway, killing Jackson and Jeffrey Monroe, a 54-year-old from Avon.

The 37-year-old, who was born in Guatemala, was driving without a driver's license and attempted to flee the scene of the accident on foot, according to Marion County Police.

Orrego-Savala had a blood-alcohol level of at least .15, which is nearly twice the legal limit, police said. He had previously been deported from the United States on two occasions, in 2007 and again in 2009.

Federal Immigration officials have placed a hold on him, and he is currently being held in the Marion County Jail. When he was arrested he told police he was a Mexican immigrant.