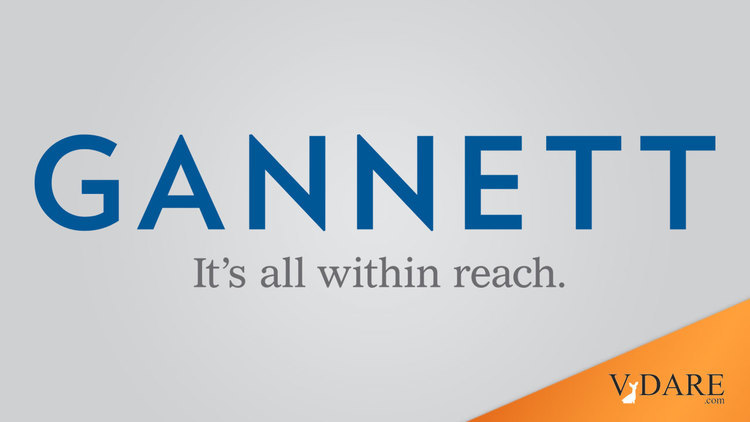 Gannett Newspapers, which just bought the Detroit Free Press, is so gung-ho on diversity, they have quotas on how many minorities must appear above the fold on the front pages of their newspapers, (preferably not in crime stories, I presume.)

Still, according to the New York Times,

it came as something of a surprise last week to some at The Detroit Free Press, which was acquired last year by Gannett, when they were told to contribute the names of minority sources to a collective list. Many newspapers keep such lists to help reporters who are assigned to an unfamiliar story, but they identify sources by their expertise. The Free Press list is meant to flag their racial, ethnic or religious backgrounds as well.

Some in the newsroom objected, saying sources should be quoted because they were the most credible on a topic or the most articulate, not because they fit an ethnic profile. They said they feared the day they might have to delete an insightful quote from a majority source in favor of a less useful quote from someone who would help the newspaper meet corporate goals. [A Gannett Paper Seeks a New Kind of Expertise, By Katharine Q. Seelye, June 12, 2006]

The blog Media Orchard, where I found this item, says

We get the idea. Still, it's a little weird.

We can see the ProfNet request now:

We're looking for experts who can provide our readers with advice regarding the asteroid that is currently zooming toward Earth.

But only if they're black.

Gannett was mentioned as a diversityphilic company in When quotas replace merit, everybody suffers by Peter Brimelow and Leslie Spencer.[Forbes, 1993] It was also featured in William McGowan's book, Coloring The News, which I reviewed here in 2002.

Dan Seligman quoted this incident in his review of Coloring the News.

Paul Teetor, an award-winning reporter at Vermont's Gannett-owned Burlington Free Press, is covering a local forum on racism. A young white woman tries to speak and is told by the moderator, a mayoral aide, that only "people of color" are allowed to speak. Mr. Teetor agrees with the woman that this is "reverse racism" and says so in his next-day news story. The mayoral aide says he will organize a march on the Free Press if Mr. Teetor isn't instantly fired. He is indeed fired, in a 90-second meeting at which he has no chance to defend himself. In the ensuing wrongful discharge suit, it emerges that the editor who fired him is under pressure from Gannett to improve his "mainstreaming" scores. That term refers to a program where editors are supposed to meet a variety of racial targets in hiring, in the use of sources and in positive news coverage. (After a few days of testimony, Gannett caves in and settles the suit.)

The same diversityphile policy has made Gannett a heavy user of H-1B visas. But one amusing thing about their corporate diversity webpage is that the "poster persons" for their diversity coverage are two white Christian women in North Carolina.

It's true that these women are "co-pastors" at a gay-friendly church, and have been "partners" for eleven years, but still..