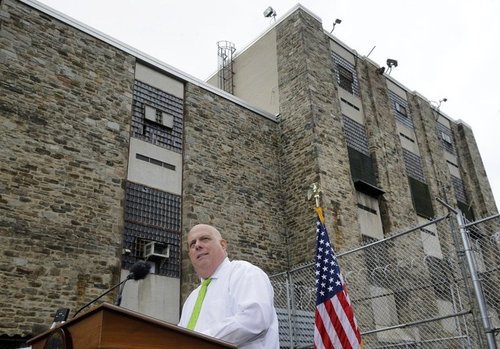 The political momentum continues to shift towards immigration law enforcement, as even Maryland will now cooperate with federal officials when it comes to deporting illegal alien criminals.

Immigration advocates in Maryland are criticizing a decision by Gov. Larry Hogan to notify federal immigration officials when an illegal immigrant targeted for deportation is released from the state-run Baltimore City Detention Center.

Advocates consider Hogan’s stance to be a departure from the policy of his predecessor, Democrat Martin O’Malley, who last year joined other elected officials in refusing requests from the Obama administration to coordinate with federal law enforcement whenever a detainee was being released.

Ms. Wiggins uses the term "illegal immigrants" in her article, but whoever adds in the title changed it to "undocumented detainees," even though we are referring to people who have literally just been incarcerated and presumably have reams of documentation on and about them. Such is the violence political correctness does to the English language.

The protests are being led by CASA de Maryland, a forthrightly anti-American group which, as you probably have guessed, is funded both by George Soros and the taxpayers [Casa de Maryland: How to use tax dollars to skirt immigration laws, by Anita Moncrief, Hot Air, September 13, 2010].

Why do they care? After all, a spokesperson for Governor Larry Hogan (above) is calling this a "public safety" action, not an immigration action. These aren't random illegals "doing the jobs Americans won't do" or the innocent victims "hiding in the shadows." These are people who have already been detained for other crimes (other than breaking into our country.)

After all, according to the Obama Administration's "Priority Enforcement Program," which replaced Secure Communities, "only immigrants who have been convicted of a serious crime, is involved in a gang or is considered a threat to national security would be targeted." So why is CASA opposed to even this action, which even the Obama Administration supports?

CASA gives us a hint.

“This really is the first ball out of the park,” said Kim Propeak, the director of CASA in Action, the political arm of the immigrant-advocacy organization. “And it doesn’t bode well. It is very, very worrying.”

It's a revealing comment because it shows there is no "moderate" enforcement mechanism "immigrant rights" groups will ever accept. We can't even agree that illegal aliens who are committing other crimes should be deported. Instead, everyone must be allowed into the country, regardless of what they do once they are here.

Why? Because that's how CASA makes more money of course. And if another Kate Steinle is killed by an illegal who was supposed to be deported, who cares? After all, saying "all lives matter" is racist.