When Christians flee majority-Muslim countries (like Lebanon — 60%), they don’t always escape hostile Muslims. Middle Eastern Christians in Denmark now report being forced to move away from Muslim neighborhoods because of the danger.

It’s unfortunate the Danes allowed Islamic immigration in the first place. They must have thought they were getting some swell diversity, but things haven’t worked out positively. The Danish critic of Islam, Lars Hedegard, narrowly escaped an assassination attempt, as did Kurt Westergaard, the edgy cartoonist who angered Muslims with his bomb-turban Mohammad drawing. Free speech is not a Muslim value.

You can find the video transcript at GatesOfVienna: Danish Muslims Attack Filthy Christians 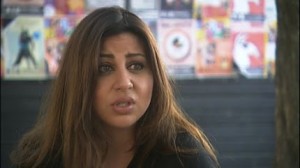 The Lebanese woman in the video (pictured) — JoJo, an alias — was brave enough to show her face and speak out about the threat.

Muslim immigration is always a bad idea. They don’t get along with anyone. But that behavior is not surprising, since the Koran (5:51) commands: “O you who believe! do not take the Jews and the Christians for friends.”

Here’s a written report from Denmark:

“Christians with Middle Eastern backgrounds in Denmark experience harassment, verbal attacks and in some cases direct violence from Muslims. TV2 News has been in contact with a number of Christians here in Denmark that tells of violent experiences.

Jojo was born in Denmark of Lebanese parents. She lived in Gellerupparken (major Muslim ghetto) until she was eight.

One day she sat in her car in Norrebro (Muslim dominated area in Copenhagen). Seven young people with Arab background surrounded the car. One of them put his foot up on the hood and stared at her.

“Do you think I’m looking at you, you fucking ugly whore. Try to see what clothes you wear, bitch,’ he said to Jojo, who dress as Danish women – shorts and T-shirt in the summer.

Then he noticed the cross around her neck.

The Danish police says that they do not get many reports about such matters – but they fear that such crimes are largely under reported – because people do not dare to report the cases. …

TV2 News has also interviewed another woman who is persecuted for her Christian faith.

She wants to remain anonymous for fear of reprisals and because she and her son are being harassed in the block where they live. Living in that area as a single Christian mother without a Islamic scarf makes her stick out in an are with primarily Muslim families.

“My son is being called everything. I get called all sorts of things. Infidel,. Filthy Christians. They tell me I ought to be stoned to death,’ she says.

“My son was beaten at the bus stop. He was called pig, dirty potato (Muslim slang for Danes), and that ‘you and your mother should die.”

She complained to the local estate office that responded by inviting the group of children and young people for a meeting. One day it knocked it on the door of Christian woman’s home. Out through the peephole she could see some of the children and young people — and she thought they had come to say sorry, so she opened the door. But instead two grown men braces into her apartment.

“He called me a dirty Christian whore and an infidel. Then he pushes me into the apartment. He shook me and slapped my face.

Both the woman of Iranian background and Jojo are now trying to move away from the areas where they live.

“I can not be in Norrebro more,’ says Jojo, who has decided to move to a shelter for her own protection.”‘