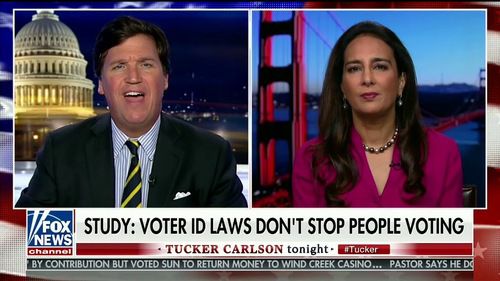 It’s good that people are paying attention to voter ID, since it’s likely that fake voters will be out in force for the 2020 election to defeat President Trump.

In fact, the complete wipe-out of Republican Congressional members in Orange County 2018 apparently resulted from a sketchy practice called “ballot harvesting” which is only legal in California. Because of a new state law, any person, including Democrat operatives, can go to a voter’s house and offer to submit mail-in votes to the polls — what could possibly go wrong?

California really is becoming the Third World, where election integrity is a joke.

Requiring identification to vote is a popular measure among the public, as shown by polling: 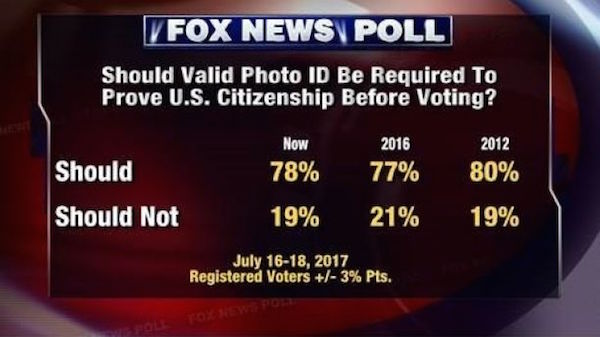 If that polling is not convincing, a recent study has reinforced the idea that voters are not as skittish as Democrats claim. Tucker Carlson explored the issue on Wednesday with immigrant attorney Harmeet Dhillon.

TUCKER CARLSON: Just about every modern country requires a photo ID to vote, but when American states start to implement the same laws, they are of course described as racist bigots, engaged in voter suppression. That’s fake, of course. It’s all a diversion. It’s a lie, and you should ignore it. But now, a new study shows just how fake it is.

Two university professors took a look at voting patterns in 10 different states and they found that voter ID laws had no effect at all on how much each group was able to vote.

It turns out that legal voters are perfectly able to get photo identification, something you knew already, and that these laws are only a problem if you want to vote illegally, but helping people to vote illegally is, of course, the entire point of preventing voter ID laws, as we knew.

Harmeet Dhillon is an attorney who covers this kind of thing and she joins us tonight. Harmeet, so it seems like the evidence is pretty clear on this from this study.

HARMEET DHILLON: Yes, actually, Tucker, these two economics professors — one at Harvard Business School and the other in the University of Bologna — used data from a liberal progressive database called Catalyst, which work with progressive groups on these issues and they examined 1.3 billion different data points and they had data on gender, race, sex, gender and political affiliation and they were able to compare the states that had the strong voter ID laws, the 10 of them against the ones that don’t, and there was statistically no difference whatsoever.

And so that really rebuts the left’s mythology that voter ID laws are directed at suppressing particularly the minority vote, et cetera, on the theory that elderly or minority or poor people are unable to get ID. I mean, you and I know that you can’t operate in society today without ID, and we need it for so many reasons, so I think this is really encouraging data.

CARLSON: Yes, you can’t have a job, you can’t fly on an airplane. You can’t cash a check. You can’t get government benefits. You can’t do anything. So it was prima facie absurd but they still wax self-righteous about it and any attempt to prevent voter fraud is suppression and you’re Bull Connor.

I wonder if the right, if Republicans will begin to do something they almost do with any topic which is push back with facts against this demagoguery.

DHILLON: Well, you know, you raise a good point, Tucker. We, as Republicans tend to become very intimidated when everybody — when anybody says the “R” word. “Oh, you are racist. You are racist.” And we really buy into that demagoguery and back down.

And I hope to see more Republicans step forward and say, “We are not racist. We are trying to protect the integrity of every single vote.” I’m an immigrant to this country and the right to vote is very precious and something that people don’t have around the world. So the way we casually water it down in this country by allowing people to vote who are not entitled to vote, we have three million illegal aliens plus in California, for example, is really shocking and it’s time for it to stop.

So I am glad to see this data not from a conservative source, but from objective professors, economists and I hope that we will begin to start pushing back on this false narrative by the left.

CARLSON: Well, yes, because the only reason they keep using it is because it works, and Republicans run and hide every single time. I mean, is there any other reason to oppose voter ID laws except to abet voter fraud?

DHILLON: I can’t think of any, and on the flip side, and as these two professors point out in their study, the effect of voter ID laws does increase confidence among the voting population in the outcomes of these elections and we certainly need more of that as well.

CARLSON: Yes, that is such a smart point. I’m losing confidence. I have always had confidence in our system and not any more. Harmeet, thank you very much.