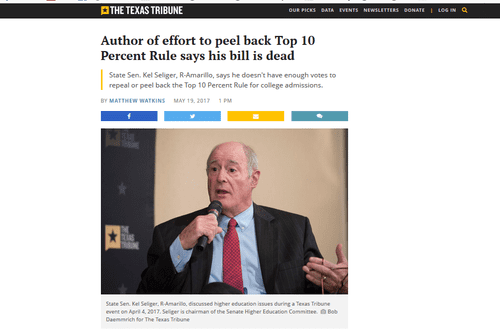 Bill De Blasio has a  stupid plan, discussed by Steve Sailer yesterday to "stop admitting students to the specialized high schools based solely on an entrance exam"but in order to "make these offers available to more Hispanic and black students, is to admit the top 7 percent of eighth graders from every middle school, based on class rank and state test scores."[See Where New York City’s Elite High Schools Get Their Students, By Jasmine C. Lee,NYT,  June 29, 2018]

This is a sleazy way to get around the fact that Federal law makes it illegal to discriminate racially in public schools, even if the intended victims are white and Asian. This is is exactly the same plan that Governors George W. and Jeb Bush put in place in their respective states in the 90s. We talked about it in 2003:

And the Bush Administration has its own idea about how to skew admissions, which it offers the Court as its surrogate for the Harvard discrimination model that so pleased Justice Powell. After the Fifth Circuit Court of Appeals ruled in Hopwood (1996) the University of Texas law school's quota admissions policy unconstitutional, Texas educrats and politicians cast about for a way to rescue minority preferences. Their solution, signed into law by Governor George W. Bush: to guarantee admission to the state university of his choice to any Texas high school graduate in the top 10% of his class. Similar programs have been enacted in Florida (top 20%, signed by Governor Jeb Bush) and California (top 4%).

The effect: de facto racial preference—10% of the graduates of Texas' worst high schools, often overwhelmingly black and Hispanic, are guaranteed places, while better qualified applicants from more demanding schools are denied. Black and Hispanic numbers at the University of Texas, which fell after the Fifth Circuit's ruling, were largely restored after the 10% Plan became law. The Bush briefs celebrate this result—even though, viewed objectively, it is a clear indication that race is once again trumping merit. The only difference is that the University of Texas can't even discriminate in favor of the best black and Hispanic candidates, who may very well be in demanding schools where they don't make the top 10%. [On The Home Front, Bush Caves On Quotas, March 31, 2003]

The Texas Plan still exists and seem unkillable--see Author of effort to peel back Top 10 Percent Rule says his bill is dead, by Matthew Watkins , Texas Tribune, May 19, 2017. There are two points here.

One is the conservative point that this has been tried before, and it was stupid then. The second is this--how bad were the Bushes on National Question issues like quotas? Bill de Blasio level bad!