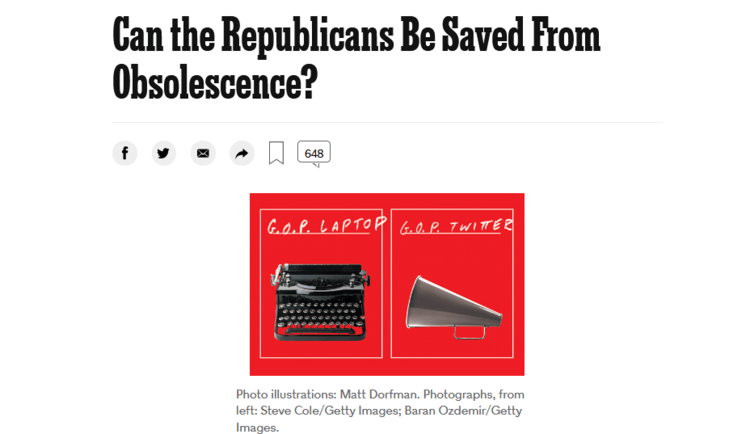 Robert Draper writes a long article in the New York Times called "Can the Republicans Be Saved from Obsolescence?" that mostly consists of younger GOP operatives like Patrick Ruffini explaining how they aren't to blame for the Romney Campaign and how they would have been awesome if anybody had hired them, what with their digital wizardry and all.

I presume there's a good story out there somewhere about the Romney campaign and its multitudinous consultants that would involve the terms "conflict of interest" and "financial malfeasance," but this isn't it.

However, when you finally get to p. 8, there's an interview with David Plouffe, manager of the 2008 Obama campaign and who just retired from being Senior Adviser to the President to go make money. Plouffe, who has just about the best track record in American politics of knowing what he's talking about when it comes to winning elections, points out that everything you've read since the election is wrong:

But, I asked Plouffe, wasn’t the G.O.P. just one postmodern presidential candidate — say, a Senator Marco Rubio — away from getting back into the game?

Pouncing, he replied: “Let me tell you something. The Hispanic voters in Nevada, Colorado and New Mexico don’t give a damn about Marco Rubio, the Tea Party Cuban-American from Florida. You know what? We won the Cuban vote! And it’s because younger Cubans are behaving differently than their parents. It’s probably my favorite stat of the whole campaign. So this notion that Marco Rubio is going to heal their problems — it’s not even sophomoric; it’s juvenile! And by the way: the bigger problem they’ve got with Latinos isn’t immigration. It’s their economic policies and health care. The group that supported the president’s health care bill the most? Latinos.”

All this Rubio / "path to citizenship" talk, it's just a Democratic honey trap to lure Republicans in to their destruction. Ask Plouffe.