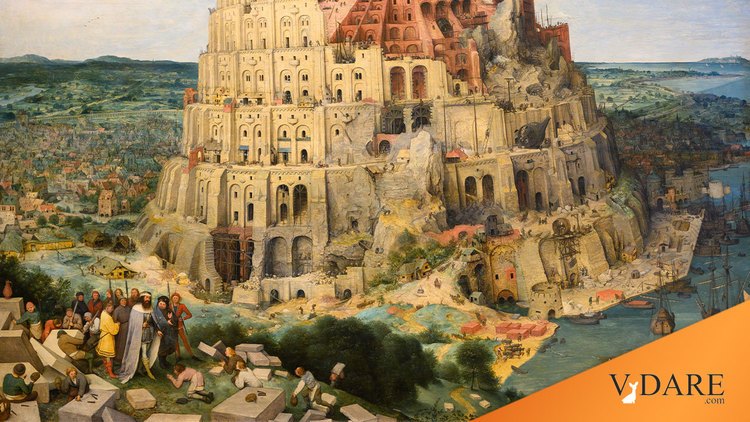 David Graeber In NYT: Ancient History Shows How We Can Create A More Equal World

Ancient History Shows How We Can Create a More Equal World
Nov. 4, 2021

By David Graeber and David Wengrow

Mr. Graeber and Mr. Wengrow are the authors of the forthcoming book, “The Dawn of Everything: A New History of Humanity,” from which this essay is adapted. Mr. Graeber died shortly after completing the book.

… For a long time, the archaeological evidence — from Egypt, Mesopotamia, China, Mesoamerica and elsewhere — did appear to confirm this. If you put enough people in one place, the evidence seemed to show, they would start dividing themselves into social classes. You could see inequality emerge in the archaeological record with the appearance of temples and palaces, presided over by rulers and their elite kinsmen, and storehouses and workshops, run by administrators and overseers. Civilization seemed to come as a package: It meant misery and suffering for those who would inevitably be reduced to serfs, slaves or debtors, but it also allowed for the possibility of art, technology, and science.

That makes wistful pessimism about the human condition seem like common sense: Yes, living in a truly egalitarian society might be possible if you’re a Pygmy or a Kalahari Bushman. But if you want to live in a city like New York, London or Shanghai — if you want all the good things that come with concentrations of people and resources — then you have to accept the bad things, too. For generations, such assumptions have formed part of our origin story. The history we learn in school has made us more willing to tolerate a world in which some can turn their wealth into power over others, while others are told their needs are not important and their lives have no intrinsic worth. As a result, we are more likely to believe that inequality is just an inescapable consequence of living in large, complex, urban, technologically sophisticated societies.

We want to offer an entirely different account of human history. We believe that much of what has been discovered in the last few decades, by archaeologists and others in kindred disciplines, cuts against the conventional wisdom propounded by modern “big history” writers. ​​What this new evidence shows is that a surprising number of the world’s earliest cities were organized along robustly egalitarian lines. In some regions, we now know, urban populations governed themselves for centuries without any indication of the temples and palaces that would later emerge; in others, temples and palaces never emerged at all, and there is simply no evidence of a class of administrators or any other sort of ruling stratum.

It would seem that the mere fact of urban life does not, necessarily, imply any particular form of political organization, and never did. Far from resigning us to inequality, the new picture that is now emerging of humanity’s deep past may open our eyes to egalitarian possibilities we otherwise would have never considered.

… What held these early experiments in urbanization together, if not kings, soldiers, and bureaucrats?

Classical city-states had a variety of types of government ranging from monarchy to democracy. Aristotle’s students tabulated the constitutions of about 170 city-states, although, sadly, we only have their write-up of democratic Athens.

In Western Europe over the last millennium, cities such as Frankfurt tended to be more bourgeois in order than the rest of society, while vast palaces like Versailles and Blenheim tended to be located in the countryside. Of course, the bourgeois valued property rights, which Graeber was suspicious of.

In general, which class is on top is related to the reigning technology of warfare. For example, as Victor Davis Hanson has shown, ancient Greek city-state battles were largely fought by middle-class farm-owning infantry who could afford an expensive sword, spear, shield, and helmet, while aristocratic cavalry were less effective.

In contrast, in Athens in the 400s BC, the navy came to the fore, with working class men making good money rowing ships. We have the impression from movies like Ben Hur that only tyrannized slaves rowed galleys, but the proles of Periclean Athens and Piraeus actually liked rowing, which made democratic Athens’ aggressive sea-based grand strategy politically feasible.

Unfortunately, we have much poorer documentation for most of ancient history than we do for Athens in the 5th century BC, so the complex interplay of warfare, technology, class, and politics that we can begin to grasp from master historians Herodotus and Thucydides is up for surmise in most other times and places.

For answers, we might turn to some other surprising discoveries on the interior grasslands of eastern Europe, north of the Black Sea, where archaeologists have found cities, just as large and ancient as those of Mesopotamia. The earliest date back to around 4100 B.C. While Mesopotamian cities, in what are now the lands of Syria and Iraq, took form initially around temples, and later also royal palaces, the prehistoric cities of Ukraine and Moldova were startling experiments in decentralized urbanization. These sites were planned on the image of a great circle — or series of circles — of houses, with nobody first, nobody last, divided into districts with assembly buildings for public meetings.

… Careful analysis by archaeologists shows how the social freedoms of the Ukrainian city dwellers were maintained through processes of local decision-making, in households and neighborhood assemblies, without any need for centralized control or top-down administration.

I’m not wholly skeptical of Graeber’s general concept of low government urbanity, but the notion that archaeologists can figure out the software from the hardware of 6,000-year-old ruins seems ambitious.

Can we correlate the constitutions of Greek city-states with the structure of their ruins? For example, democratic Athens built the superb and thus vastly expensive Parthenon, the financing of which undermined the Delian League and thus eventually set off the Peloponnesian War.

… Why has anyone with even a passing interest in the origin of cities heard of Uruk or Mohenjo-daro, but almost no one of Taljanky or Nebelivka?

… Obviously, we have no idea how relatively happy the inhabitants of Ukrainian mega-sites like Maidanetske or Nebelivka were, compared with the steppe-lords who covered nearby landscapes with treasure-filled mounds, or even the servants ritually sacrificed at their funerals (though we can guess). And as anyone who has read the story knows, Omelas had some problems, too.

But the point remains: Why do we assume that people who have figured out a way for a large population to govern and support itself without temples, palaces and military fortifications — that is, without overt displays of arrogance and cruelty — are somehow less complex than those who have not?

Here’s a guess at what Talianki would have looked like 6,000 years ago. It appears to have three sets of walls or ditches or palisades, what I would call “military fortification:” 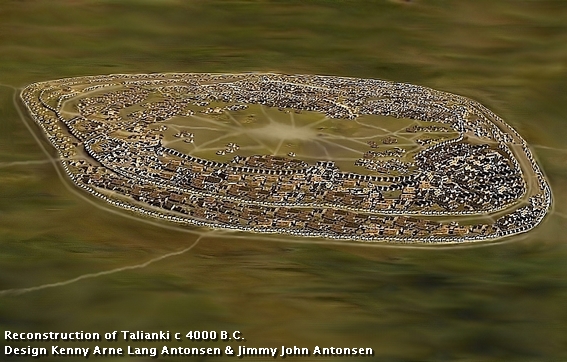 Reading up on this wholly new topic to me, I see a lot of references to “mega-structures,” such as the “Temple of Nebelivka": 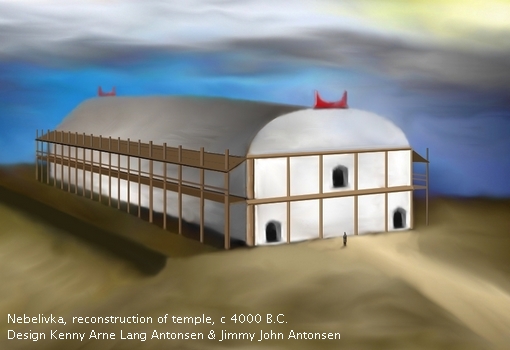 Why would we hesitate to dignify such a place with the name of “city”? The mega-sites of Ukraine and adjoining regions were inhabited from roughly 4100 to 3300 B.C., which is a considerably longer period of time than most subsequent urban settlements. Eventually, they were abandoned. We still don’t know why. What they offer us, in the meantime, is significant: further proof that a highly egalitarian society has been possible on an urban scale.

Why should these findings from the dim and distant past matter to us today? Since the Great Recession of 2008, the question of inequality — and with it, the long-term history of inequality — have become major topics for debate. …

What we need today is another urban revolution to create more just and sustainable ways of living. The technology to support less centralized and greener urban environments — appropriate to modern demographic realities — already exists. Predecessors to our modern cities include not just the proto-megalopolis, but also the proto-garden-city,

The less centralized and greener urban environments modeled on the proto-garden-city sure sound a lot like … The Suburbs.

Anyway, to go back to Graeber’s argument, being a nice modern leftist, he seems to ignore the need for defense of your people and property from The Other. Instead, the enemy is only the better organized and more effectual of your own people. The danger from The Other is just a trope.

But, while Stationary Bandits, who have incentives to see their peasants prosper so they and their heirs can extract more rent and taxes and tithes from them, are generally to be preferred to Roving Bandits with their I-want-the-marshmallow-NOW timeframe, it sure would be nice to do without either.

Perhaps those Ukrainians of 5–6,000 years ago were smart and lucky enough to avoid both.

The domestication of the horse probably made Roving Bandits much more formidable. When the horse entered into military history is unknown. The era of these Ukrainian semi-cities may have preceded the weaponization of the horse on the Eurasian steppe. And perhaps their downfall may have been related to the arrival of domesticated horses.

In any case, military fortifications, such as walls, which Graeber stupidly dismisses as “overt displays of arrogance and cruelty,” would be key to avoiding rape and pillage by The Other. Historian David Frye’s book Walls documents that down through history until the invention of cannon, wall-building (or other defensive lines, such as palisaded ditches) was the best solution for the Hobbesian war of all-against-all that was otherwise the default for human existence.

But it’s hard. Free-riding and treason are constant temptations to shirk contributing voluntarily to wall-building.

For example, the U.S. failed to build a border wall during the Trump era.