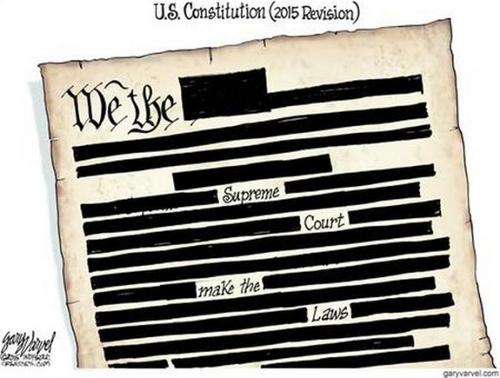 It is almost exactly a year since I posted REDSTATE Represses Daniel Horowitz: Too Effective Against Amnesty And GOP/AdelZuck Establishment? and the past few days have demonstrated how wise that Judas Goat operation was. Barely a day after the Chattanooga atrocity this remarkable young man posted a well-argued call for curtailing Muslim immigration which I praised in Looks Like MSM, Big Donors, Vetoing Any Discussion Of Ending Muslim Immigration and which was picked up by the Drudge Report. Today he opened an offensive on a completely new front: Time To Strip Lower Courts Of Jurisdiction Over Immigration Conservative Review July 21st, 2015

If pigs could fly conservatives would take back the White House and the legislative branch of government with solid constitutionalists in one election cycle.  But even that tantalizing fairy tale would be rendered moot if nothing is done to immediately reform the federal judiciary and stave the coming tide of judicial tyranny.  Nowhere is this more evident than with the Court’s unconstitutional doctrine of conferring super rights on illegal aliens…

As I noted following the Supreme Court’s bloodless coup on our constitutional form of government, as bad as 5-6 SCOTUS justices seem to be, they are on the level of James Madison when compared to some of the lower court judges.

Ponder this absurdity for a moment: Arizona is beleaguered by an endless flow of illegal immigrants and drug violence that have caused incalculable damage to the state’s schools, hospitals, security, criminal justice system, and public services.  Even their elections and congressional apportionment are radically altered by those who lack the legal standing to be in their state.  Yet, every time they attempt to pass laws protecting their state, they are sued by the bottomless money pit of left-wing legal defense groups.  One after another, the courts have tossed out their common sense laws that have merely echoed the spirit of congressional laws

…why is a federal judge ignoring the Constitution and focusing on political arguments?  Arizona is merely following federal law.

With a growing majority of anti-constitutionalist judges, including those appointed by Republicans, we face a judicial time bomb in the coming years.  We face a reality of a court system that will invalidate every state or federal effort to clamp down on illegal immigration…Judges who uphold the rule of law are the exception not the rule.

He has a radical conclusion:

There is no way around this.  Republican presidential candidates must put forth a judicial reform plan – one that will begin by stripping at least the lower courts of the power to overturn immigration enforcement laws…we cannot afford to have unelected judges who don’t believe in our Founding values grant “constitutional” rights to the world’s population.

…All of this is within Congress’ purview and can be accomplished through the legislative process – without constitutional amendments.

VDARE.com has long been interested in the problem of “Kritarchy” – rule by Judges. We even praised Newt Gingrich for raising the issue! And as I commented in Can Free Speech (And America) Survive A Minority-Dominated Supreme Court? the problem of a legislating Judiciary is far worse when that Judiciary is heavily drawn from communities with no comprehension of (much less reverence for) the legal processes America inherited.