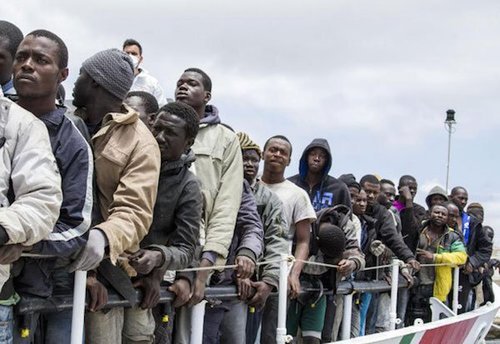 Below, African men disembark on the alien-battered Italian island of Lampedusa in May 2015.

Not that many years ago, when a nation was invaded, its government organized resistance through its military forces. These days, the governments of Europe are facilitating the invasion by rescuing the thousands Africans headed north for plunder and depositing them in the desired end point of their journey.

Europeans located on the edges, like Italians and Greeks, are not happy with being inundated by diverse hordes looking for a handout.

As happens when governments don’t do the job they were hired to do, the DIY urge may occur among the citizens (sometimes called vigilantism). Instances of citizens protecting their country from invasion via illegal immigration will hopefully expand, because that’s the only hope for Europe’s survival.

It’s unfortunate that Italians feel they must defend their homes against opportunists from the third world. There are some genuine refugees taking to boats across the Mediterranean, but most are economic moochers from peaceful African nations who want a first-world lifestyle.

Meanwhile Europe has problems of its own, like stubborn unemployment and doesn’t need thousands of unskilled African men who feel entitled to free stuff. This invasion could end badly when employment shrinks even further because of automation, and legions of jobless foreigners become disappointed and angry. Better to end it now, Europe.

(ANSA) – Rome, July 17 – A bus carrying 19 asylum seekers and escorted by police in riot gear pushed past protesting local residents and extremists from the far-right Casapound political group to arrive at the doors of a migrant reception centre in Rome’s Casale San Nicola district Friday. The refugees were spotted inside the bus, curtains drawn as the bus was pelted water bottles and other objects thrown by anti-immigrant protesters, some of them shouting “You have to get out of here”.

Police at one point baton-charged the protesters after coming under a barrage of objects including sun umbrellas and chairs. Protesters also torched rubbish bins and bales of hay, while others tried to block a street.

Rome Prefect Franco Gabrielli was adamant that the protesters would be cleared. “We won’t take any steps back,” he said. Later in the day he said the violent anti-immigrant demonstrations were “indecent and unseemly”. “I hope law enforcement will cite these people so their records will reflect the things they have stained themselves with,” he said.

The prefect added “I sincerely hope the temperature will go down”. Police said later that 14 of their own were injured in the violent clashes and they arrested two protesters, cited one offender, and identified 15 more. Investigators are still going over video material to identify further suspects, police said in a statement.

Also on Friday, similar protests broke out in northern Italy, where governors from the anti-immigrant, anti-euro Northern League party have been inciting mayors to fight the arrivals of migrants into the region. Among them was Veneto Governor Luca Zaia, who complained about the “Africanization” of his region through the admission refugees into his area. Some 100 migrants whose presence in a hotel in a small town near Treviso sparked two days of protests from local residents and rightwing extremists from the Forza Nuova group – including the burning of mattresses meant for the asylum seekers – were bused to a former barracks located between the municipalities of Treviso and Casier. Their respective mayors, Giovanni Manildo and Miriam Giuriati, met with area residents prior to the transfer and explained that authorities would guarantee security and keep the peace. The area is manned by law enforcement and local police patrols.

Treviso also saw leftists from the ZTL collective go into action in defense of the refugees, occupying parts of the prefecture and calling for the prefect to step down after he bowed to violent pressure from anti-immigrant residents and rightwingers.

Police arrested 38 ZTL members in the course of that protest.

The Northern League has stepped up its anti-immigrant rhetoric in recent months, as a growing migrant crisis fuels political divisions in the country, which is struggling to emerge from an economic slump that has thrown many people into unemployment.

“Instead of giving protesting mayors and citizens a hard time, prefects should do their job and stop coddling thousands of illegal immigrants,” said League chief Matteo Salvini.

Khalid Chaouki, an MP for the ruling centre-left Democratic Party (PD), slammed Salvini in response. “Salvini’s instigation to violence is shameful! Trying to pick up votes on people’s misfortune is disgusting,” he said on Twitter following the protests in Rome and Treviso. Italy has seen a wave of migrants and asylum seekers from the across the Mediterranean as thousands flee war and violence in Africa and Middle East. New figures suggested about 170,000 migrants arrived in Italy by sea in the first half of this year alone.