Daniel Horowitz: If Obama Can Rule By Decree, Why Not A 3rd term? 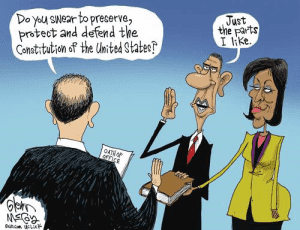 Yet, at the same time that Obama has assumed the powers Alexander Hamilton referred to as the prerogative of perpetual and hereditary prince, you have publicly and preemptively ceded all powers Congress has to stop this regime.  You have made it clear to the president that no matter how egregious and unpopular his edicts are with the people, you will not wield the power of the purse in any consequential way…

…is there anything this president cannot get away with over the next two years?  He can violate any and every law on the books, yet what are you going to do about it?  Won’t it lead to a government shutdown?

And this two-year constitutional crisis is based on the assumption that he doesn’t unilaterally nullify the 22nd Amendment and run for a third term…After all, we can’t have a government shutdown.

Make no mistake about it, immigration is just the beginning

When something ghastly happens and another Patriot fabricates an effective blade shortage of resources impels us to pick it up and use it again. I noted this in Definitive Daniel Horowitz Evisceration Of GOP House Leadership Amnesty “Principles” AKA Betrayal referring to the desperately missed Larry Auster’s “GOP Drinks The Kool-Aid”

No wonder Daniel Horowitz was evicted from RedState and The Madison Project.