Illegal Immigrants Disrupt US Congressional Hearing—Why Aren't They Being Deported?

Once again, this story from The Blaze illustrates how much illegals are not in the shadows, and why Strategic Deportation would be a useful tool. Illegals in the hearing room on Tuesday started shouting things like “Stop deportation” and “I got 19 years, and then I have citizen children in this country.”

That's we mean by anchor babies— citizen children used  by their illegal parents to prevent deportation. Another man felt that his long record of undetected crime gave him squatters rights to America was heard from:

“Hey, I’ve been in this country for 30 years, man, thirty years,” said a man. “This is an injustice, man. I mean, it’s crazy. Thirty years and you can’t pass a bill. It’s ridiculous.”

You want to know what's ridiculous? They did pass a bill twenty-eight years ago, the IRCA Amnesty of 1986. It was a mistake , regretted by Charles Grassley who voted for it, and Ronald Reagan who signed it.

Another woman pleaded, “My children were born in this country! We follow the rules! We have our rights too!”

The protests marked a full day of immigration-related events in Washington on Tuesday. House Republicans started the day in a meeting in which they tried to figure out how they might scale back President Barack Obama’s executive action on immigration, although Republicans were not able to finalize a plan.[Immigrants invade, disrupt House hearing on immigration, by  Pete Kasperowicz, December 2, 2014]

Goodlatte was asking the Capitol Police to remove the protesters, who were disruptive. As I've written before, this is an application of the violent  Latin American mob protests known as the turba divina to American politics. (The  turbas divinas were sponsored by the Sandinista Government—these people have the support of the Executive Branch, which is why it's alarming to see them in the US Congress.) 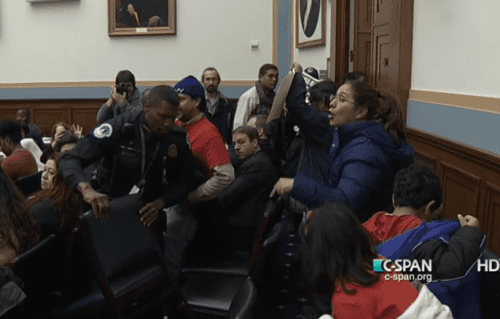 But why didn't Goodlatte try having them arrested and turned over to the immigration authorities? Deporting people like these, who protest (illegally) and block highways and all that kind of thing would be a good idea, an application of the "Broken Windows" theory to illegal immigration.  Mexico deports even legal immigrants who engage in political protests.

It would be interesting if a Senator did have the Capitol Police turn some illegals who'd disrupted hearings over to ICE—and Barack Obama let them go. Maybe that would get them interested in impeaching him.