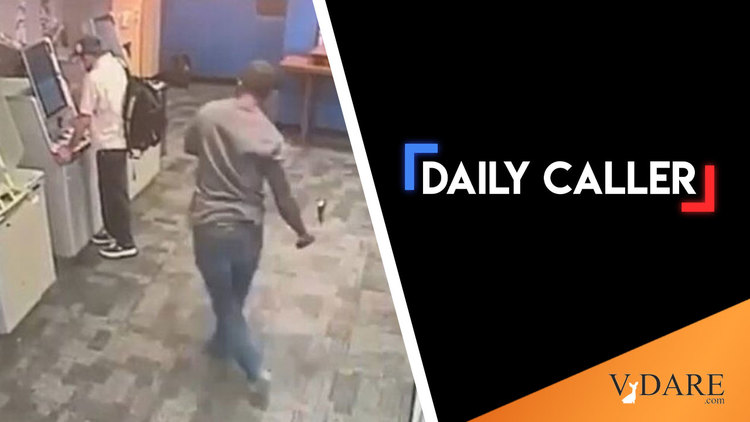 The Daily Caller is at it again.

In a report about a black man who attacked what appeared to a white or Hispanic man with an axe at a Chase Bank in New York, the reporter omitted the race of the victim and the would-be murderer [Graphic Video Shows Footage Of Brutal Hatchet Attack Near Manhattan ATM, by Ashley Carnahan, August 18, 2021].

Maybe that's because the story included a tweet from Andy Ngo that featured security camera footage, or maybe not.

GRAPHIC: Police in New York City are trying to identify & find a black male suspect who randomly hacked a victim using a hatchet inside Chase Bank in the financial district on 15 Aug. pic.twitter.com/mvO7N0xtUf

Maybe reporter Carnahan is, like so many writers, even in the "conservative" media, brainwashed into not reporting race in crime stories.

Leaving it out comports with the many "brawl" videos uploaded by David Hookstead. He frequently writes about "people" in "fights," never about blacks attacking whites or each other for no apparent reason.

Another Caller report of a brutal attack on a bus in San Francisco, in which a black man set a passenger's hair on fire, ignored this salient fact: Police blotted out the face of the attacker while asking for help identifying him.