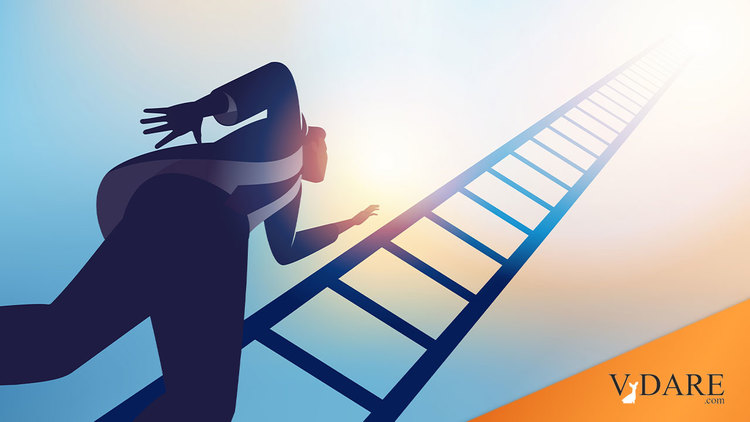 Unz columnist James Thompson. James has posted a penetrating review of Charles Murray's new book, Facing Reality, which has of course gone deeply un-reviewed by the mainstream press and media.

One of the commenters on Thompson's review opens his comment by saying, quote:

Meritocratic America, to the extent that it existed, is dead.

That stopped my eye because I was just reading an article in the August 7th issue of The Economist arguing that whereas the U.S.A. was once more meritocratic than Britain, the reverse is now the case. Partly, the article argues, this is because Britain has shed some of its old class obsessions, but partly it's because America has simultaneously, and quite deliberately, made itself less meritocratic in pursuit of, yes, equity.

"The two countries’ differing trajectories are perhaps most obvious in education, especially in admissions to the universities that act as gatekeepers to the elite"

Here is a longish extract from that article, slightly edited.

Harvard, like other elite American universities, practises plutocracy modified by affirmative action … The intention is to compensate for the terrible injustice of slavery and, more broadly, to find merit where it was once overlooked. But it is undermined by an almost wilful blindness to disadvantage that stems from class, not race. Harvard recruits more students from the richest one percent than the poorest sixty percent, discriminating in favour of relatives of faculty and alumni (known as "legacies"), star athletes and the "dean's list," which mysteriously tends to feature the offspring of politicians, celebrities and donors. "Holistic assessment" of candidates encourages CVs that bristle with boasts about pricey trips to Africa to help the poor. It boosts the well-connected, who can get supporting letters from impressive names. Peter Arcidiacono of Duke University calculates that three-quarters of successful white applicants in these favoured categories would have been rejected if they had been treated the regular way.

That sounds right to me. America used to be the nation of the common man, while Britain was the land of snobbery and class privilege. Now we're changing places. So the wheel turns.