White woman academic CV Vitolo-Haddad, who demands everybody refer to her as "they," is now being canceled for NOT being:

University of Wisconsin-Madison grad student admits pretending to be a person of color
By Hira Humayun and David Williams, CNN 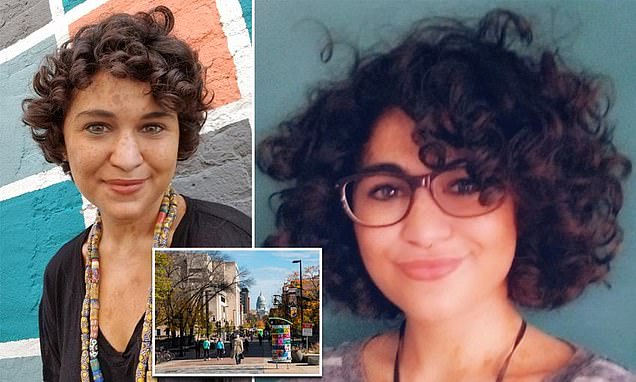 (CNN) A graduate student at the University of Wisconsin-Madison has resigned from a teaching position after admitting on social media that they [sic] falsely claimed to be a person of color.

CV Vitolo-Haddad apologized last week in two posts on Medium and announced that they [sic] were leaving their position as the co-president of the university’s Teaching Assistants’ Association (TAA). Vitolo-Haddad uses the nonbinary pronouns they/them.

The apologies came after an anonymous post on Medium accused Vitolo-Haddad of misleading people about their racial and ethnic identity.

In a September 6 post addressed to “dear friends, loved ones and organizing comrades,”

Vitolo-Haddad wrote that they were “so deeply sorry for the ways you are hurting right now because of me.”

“I have let guesses about my ancestry become answers I wanted but couldn’t prove. I have let people make assumptions when I should have corrected them,” Vitolo-Haddad wrote.

In a second post that was edited on September 11, Vitolo-Haddad wrote that they were of southern Italian/Sicilian heritage.

“When asked if I identify as Black, my answer should have always been ‘No.’ There were three separate instances I said otherwise,” Vitolo-Haddad wrote, adding that “I should have never entered Black organizing spaces.”

Let’s not ask about any affirmative action they enjoys in admissions and hiring. Nobody is supposed to think about how it is in the career self-interest of white leftist academics like Jessica Krug, CV Vitolo Hadad, and Elizabeth Warren to check off race boxes other than white on application forms.

Vitolo-Haddad was offered a conditional tenure-track position at California State University, Fresno, and was scheduled to start teaching during the 2021 fall semester, a university spokeswoman told CNN. The offer was made before the allegations were made public and was subject to Vitolo-Haddad completing a background check.

“We can confirm that CV Vitolo-Haddad will not be a faculty member at Fresno State,” said spokeswoman Patti Waid.

… “The TAA enabled this harm by electing them to a position of power in our union: we have unknowingly rewarded the toxic opportunism of performing Blackness. We intend to immediately begin the work of repairing this harm,” the statement said

With that kind of scintillating resume, she no doubt would have been hired for a tenure track professorship even if she’d admitted to being white.

A few notes: The “Haddad” part of her name comes from an ex-spouse. She claimed when first semi-‘fessing up to be a little bit Eritrean. Eritrea was a colony of Italy and has a large Christian population, so this assertion is not prima facie implausible.