Cultural Marxism Vs. Capitalism: Conservative Books Sell, But It's Money That Many Publishers Don't Want 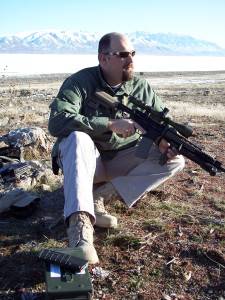 Science fiction author Larry Correia (right) is the author of the best-selling Monster Hunter series, so he gets to go on business trips to the center of the publishing world, New York City. Since he's a gun owner from a red state, this involves some mutual culture shock:

There were also some interesting political conversations. The vast majority of the publishing folks live around and work in New York and are usually politically liberal. Everybody is nice, but at party conversations, people like me are a weird fly-over, red state curiosity. No, really, I do own like that many guns.

I had a fascinating and too brief conversation about how Simon & Schuster realized after Bush’s reelection that there were actually lots of people in America who are not liberal and did not think that way, and maybe they should start some imprints to publish conservative political books, and New York publishing was all like no way, nobody believes that stuff. But S&S started some imprints aimed at conservative audiences and shockingly enough, made buckets of money.[Back from New York, BEA Recap, and Updates, MonsterHunterNation, June 1, 2015]

Simon & Schuster owns Threshold Editions, about which they say

Threshold Editions is an imprint of Simon & Schuster that specializes in conservative non-fiction. Recent successes include #1 New York Times bestsellers Liberty and Tyranny by Mark Levin, An Inconvenient Book by Glenn Beck, and The Obama Nation by Jerome R. Corsi, Ph.D.

Congratulations to Simon & Schuster for getting it about Americans—somewhat belatedly—and capitalizing on it like actual capitalists. As I wrote in a column called From ANIMAL FARM To AMERICAN SNIPER—Cultural Marxist Capitalists Leave Billions On The Table, But There’s Hope For American Culture Yet, people who work in publishing and entertainment are willing to lose billions of dollars annually to avoid pandering to the tastes of normal Americans.

I quoted Jacob Weisberg's  1995 review  of Alien Nation, in which he claimed that that Random House had failed in its duty protect the  Narrative:

Not so long ago, the literature of egregious bigotry was treated like pornography. You had to send for it by mail—from backwoods presses that advertised in the classified sections of conservative magazines—or frequent the political equivalent of dirty bookstores. Today, you just walk into any Barnes & Noble. The Free Press set the precedent last fall with Charles Murray and Richard Herrnstein's The Bell Curve, which argued that blacks are genetically less intelligent that whites. Now comes Random House with Peter Brimelow's Alien Nation., another expression of intellectualized white rage that attempts to do for immigrants, and Hispanics in particular, what Murray did for blacks. Odds are it will enrage sensible folk, convince no one, and earn a small fortune. [Links added—the original was on paper.]

And I said "Wait: “earn a small fortune”? Don’t publishers like a small fortune?" Actually, most of them don't, if it means publishing conservative books. But apparently Simon & Schuster does.