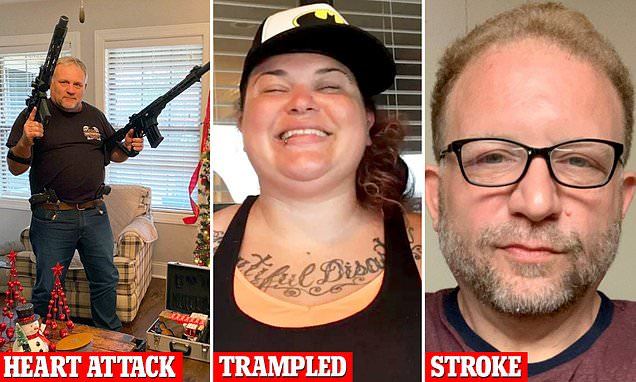 The Three "Medical Deaths" In The Capitol Protest Are Not Trump's, Or The Protesters', Fault

The Washington Times report on the shooting of an unarmed white woman named Ashli Babbitt says the officer who shot her is on leave, but said officer is not identified by name, race, or even sex: "The officer, who has not been identified, will have their police powers suspended while awaiting the outcome of a joint investigation between the Capitol Police and Washington’s Metropolitan Police Department." [Capitol Police officer who shot, killed woman during protest placed on administrative leave, by Jeff Mordock,  January 7, 2021]

The police chief didn’t provide any additional information about the individuals, who died on and around the Capitol grounds.

They're all white Trump supporters.

Alabaman Kevin Greeson, 55, had an ordinary heart attack. [An Alabama man who suffered a heart attack outside the Capitol is among the dead, by Adam Goldman, NYT, January 7, 2021]

Roseanne Boyland, 34, according to her family, died of being "trampled". I don't know the full circumstances, but people dying of being trampled are generally blamed on poor police crowd control.

Police could have either prevented, with massive infusions of force, an invasion at all, or they could have done what the Wisconsin Capitol Police did when their capitol was occupied, or what the same Capitol Police did during a Kavanaugh-inspired invasion of the Senate Office Building  which is just let them in, without killing anyone. They did neither:

On the streets of Washington, federal law enforcement agencies and the National Guard — which had been intimidatingly visible during protests [ !] this summer following the death of George Floyd — kept a much lower profile.

And at the Capitol itself, police had set out low barriers and officers were largely in street uniforms, not riot gear. All were prepared to confine a protest, but not to deter an attack, law enforcement officials said.

Law enforcement experts said they were mystified by the tactics that police used once the mob was already inside the Capitol.

And reports that a Capitol Police officer was killed seem to be false:

US Capitol Police say reports that an officer has died are not true. "Although some officers were injured and hospitalized yesterday, no USCP officers have passed away."

The Daily Mail, which provided the photo above, has more details, although entirely the wrong tone. ("MAGA fanatics".)

The marchers did nothing to cause the helicopter crash, it just....crashed. [Helicopter pilot in fatal Charlottesville crash lost control and lacked key training from state, NTSB says, by Michael Laris, July 15, 2020]

These deaths are going to be blamed on the Right, or Trump in the same way.