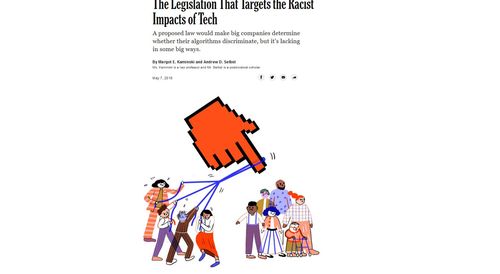 The Legislation That Targets the Racist Impacts of Tech

A proposed law would make big companies determine whether their algorithms discriminate, but it’s lacking in some big ways.

By Margot E. Kaminski and Andrew D. Selbst
Ms. Kaminski is a law professor and Mr. Selbst is a postdoctoral scholar.

In the wake of recent revelations about biased algorithms, congressional Democrats have proposed a bill that would require large companies to determine whether the algorithms they’re using result in discrimination, and work to correct them if they do.

The bill, called the Algorithmic Accountability Act and introduced last month by Senator Ron Wyden, Senator Cory Booker and Representative Yvette D. Clarke, is a good start, but it may not be robust enough to hold tech companies accountable.

When creating a machine-learning algorithm, designers have to make many choices: what data to train it on, what specific questions to ask, how to use predictions that the algorithm produces. These choices leave room for discrimination, particularly against people who have been discriminated against in the past. For example, training an algorithm to select potential medical students on a data set that reflects longtime biases against women and people of color may make these groups less likely to be admitted. In computing, the phrase “garbage in, garbage out” describes how poor-quality input leads to poor-quality output. In this case we might say, “White male doctors in, white male doctors out.”

And that’s why there are so few nonwhite and/or nonmale medical students these days.