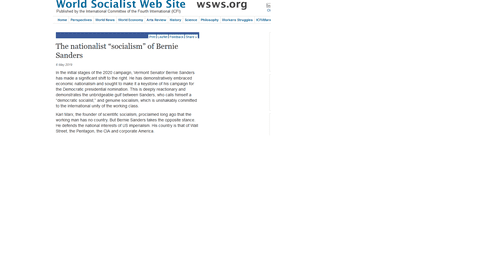 Before we get a million angry emails, no, Bernie Sanders is not an immigration patriot. However, both recently and in the past, Sanders has shown at least some awareness that if America has open borders, wages will collapse, social programs will become untenable, and the social fabric required for any kind of socailist "solidarity" will be ripped apart.

For that reason, he is receiving condemnation from the hard Left.

In the initial stages of the 2020 campaign, Vermont Senator Bernie Sanders has made a significant shift to the right. He has demonstratively embraced economic nationalism and sought to make it a keystone of his campaign for the Democratic presidential nomination. This is deeply reactionary and demonstrates the unbridgeable gulf between Sanders, who calls himself a “democratic socialist,” and genuine socialism, which is unshakably committed to the international unity of the working class.

Karl Marx, the founder of scientific socialism, proclaimed long ago that the working man has no country. But Bernie Sanders takes the opposite stance...

Last week, Sanders attacked former Vice President Joe Biden, one of his principal opponents for the Democratic presidential nomination, denouncing his suggestion that the United States need not be unduly concerned about the prospect of Chinese companies defeating American companies in the world market. “They’re not bad folks,” Biden said. “But guess what, they’re not competition for us.”

Biden was espousing a slightly different version of the reactionary chauvinism that is a hallmark of American capitalist politics. “Don’t worry, we can beat them easily,” was his boast.

Sanders objected, saying in a tweet, “Since the China trade deal [in 2000] I voted against, America has lost over 3 million manufacturing jobs. It’s wrong to pretend that China isn’t one of our major economic competitors. When we are in the White House we will win that competition by fixing our trade policies.”

If there are two words that you don't generally want associated with you in mainstream American politics, they are "national" (or nationalist) and "socialism." Yet this rather hysterical labeling aside, Senator Sanders does have a message that can be compelling to a large number of American workers that Donald Trump won in 2016. According to a Pew study in 2017, the second largest component of the GOP are "Market Skeptic Republicans," and one suspects an even larger number of independent voters that turned out in the Rust Belt might fall into that category.

If Sanders at least makes some noise about securing the border while offering social programs (even if they might unsustainable in the long run), he could pose a significant political threat to Donald Trump's coalition.

Of course, all this might be moot. Right now Joe Biden is in a commanding lead [Biden takes 32-point lead over Sanders in new 2020 poll, The Hill, May 6, 2019] and his blue collar stylings notwithstanding, he represents much the same neoliberal, New Democrat politics that Hillary Clinton [Joe Biden's platform for 2020: Anti-populism, by Bill Scher, Politico, September 23, 2017]. The difference is that he is more likable than Hillary Clinton.

However, though current polls show Biden defeating President Trump, the incumbent president might be able to use his record on trade to beat down Biden's appeal for the working class, just like candidate Trump did in 2016. Such a strategy would not work against Sanders. Instead, it would be all alarmism about "socialism." That might be appealing to Conservatism Inc., but hasn't worked in other local races so far [When the GOP tried - and failed - to tag Democrats as socialists, by Holly Otterbein, Politico, April 12, 2019]

Sanders's stance may upset the hardest of the hard Left. His social programs are also unlikely to work in the long run, even if he manages to get them through Congress. Also, as Peter Brimelow has observed to me, he has never really been through a bruising campaign, and there are plenty of bizarre things in his past. Still, his message is dangerous, and I wouldn't count him out just yet.