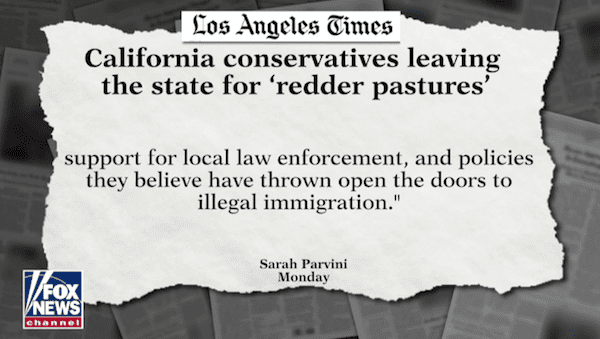 The front page of Thursday’s Los Angeles Times included a notice of how California has become increasingly unfriendly to conservative-minded residents who are leaving in the thousands — the newspaper headline was Leaving California for ‘Redder Pastures.’ The piece began with a description of a retired couple, Judy and Richard Stark, who packed it all up for a move to McKinney, Texas, north of Dallas. The two conservatives were tired of the liberal politics as well as policies that welcomed illegal immigration. 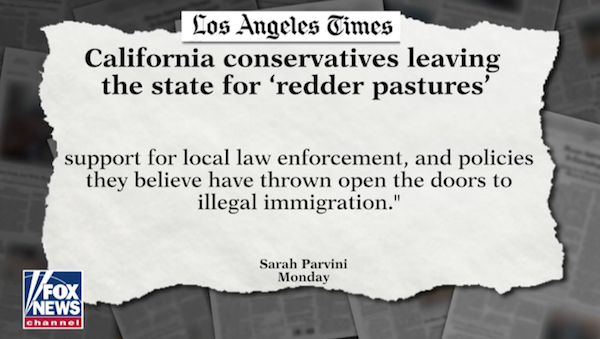 It makes sense then that California has teetered on the brink of a 40 million population for a while, but it hasn’t gotten there because the illegal aliens flowing in have been balanced by the citizens escaping. Still, it’s pretty amazing that nearly 700,000 left the once desirable state in 2018. 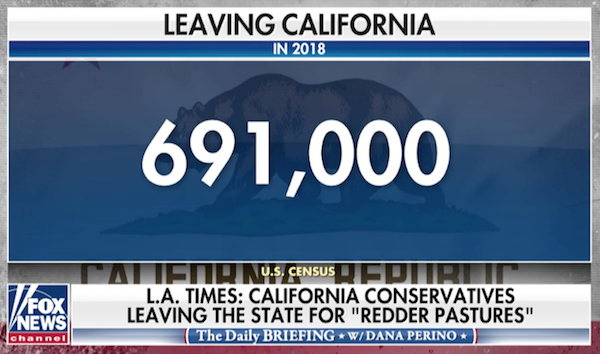 A Fox show noticed the same article and discussed the big picture. Economist Steve Moore asked, “How do you screw up California? Beautiful weather, beautiful mountains, the technology capital of the world, and yet I just have to say, the high taxes, the high regulation, the high housing costs are just driving middle class people out. And by the way, it’s the middle class that’s leaving, so California’s becoming a state of super rich people who live in Silicon Valley and very poor people and homeless people who live in the cities. It’s a sad situation.”

California residents leave for many reasons, like the aforementioned high taxes, crushing traffic, skyrocketing cost of housing — and also to escape demographic changes that tear at the cultural fabric.

The Volkswagen SUV whizzed past the Texas state line, a U-Haul trailer in tow, as it made its way toward Amarillo.

“Yay!” Judy Stark cried out to her husband, Richard, as they officially left California. The pair bobbed their heads to ’50s music playing on the radio.

Like many other Republican and conservative voters in California, the retired couple have decided to leave the state. A major reason, Stark and her spouse say, is their disenchantment with deep-blue California’s liberal political culture.

Despite spending most of their lives in the Golden State, they were fed up with high taxes, lukewarm support for local law enforcement, and policies they believe have thrown open the doors to illegal immigration.

Just over half of California’s registered voters have considered leaving the state, according to a UC Berkeley Institute of Governmental Studies poll conducted for the Los Angeles Times. Republicans and conservative voters were nearly three times as likely as their Democratic or liberal counterparts to seriously have considered moving — 40% compared with 14%, the poll found. Conservatives mentioned taxes and California’s political culture as a reason for leaving more frequently than they cited the state’s soaring housing costs.

Stark and her husband decided it was time to put their Modesto home up for sale about six months ago. After doing some research online, she came across the website Conservative Move, which, as its name suggests, helps conservatives in California relocate from liberal states to redder ones, such as Texas and Idaho.

Pulled over at a Pilot truck stop just outside Amarillo, Stark said she was excited to be hours from their final destination, Collin County, near Dallas. The pair purchased a newly constructed three-bedroom home in McKinney for about $300,000. In much of California, Stark said, a similar home would run about twice as much. (Continues)