Thursday saw an instance of dueling press conferences in the big capitol city. On one side was 7/8 of the Gang of Eight Senators, plus an assortment of other high-profile open-borders enthusiasts in suits, from friend-of-hostile-Islam Grover Norquist to AFL-CIO president Richard Trumka, and representatives from the Chamber of Commerce and la Raza (“the Race”).

On the other side were concerned law enforcement officers engaged in border security, along with Senators Jeff Sessions and David Vitter plus Congressman Lou Barletta.

Senator Sessions noted, “Like 2007, this bill is amnesty before enforcement. It’s immediate legality with the promise of enforcement. And the promises of enforcement in the future appear to be even weaker than they were in 2007. The day the bill passes, illegal immigrants will have the presumption of amnesty and all Secretary Napolitano has to do is submit a vague plan within six months that may never be implemented.”

ICE Union Director Chris Crane spoke, saying “Almost a month ago we asked for a meeting with the Gang of 8 to discuss law enforcement concerns. They told us they weren’t taking meetings, but they were meeting all along with the special interests and pro-amnesty interests. Finally after public pressure grew, I got a late Monday night meeting with Sen. Rubio before this almost 1000-page bill was introduced. I raised my many public safety concerns and pleaded with them not to drop the bill until these public safety concerns from law enforcement were addressed. They dropped it anyway.”

He continued, “This bill will put the public safety at risk without doubt. It fails on interior enforcement; it’s amnesty first, enforcement perhaps never. Under the Obama administration, immigration agents could no longer arrest those who violate US immigration law; immigration agents cannot arrest an individual for entering the US illegally. We can’t arrest an individual who illegally overstays a visa. Immigration agents are prohibited from enforcing laws regarding fraudulent documents and identity theft by illegal aliens. Agents are forced to apply the DREAM Act not to children in schools but to adult inmates in jails, releasing criminals back into the communities throughout the nation, criminals who have committed felonies, who have assaulted our officers and who prey on children.”

Elsewhere in Washington the Gang of 8 enemies of American sovereignty regaled the stenographer press with self-congratulatory descriptions of their 844-page bill, negotiated in secret.

“Yes, we offer a path to citizenship to people who didn’t come here legally,” said Sen. John McCain, R-Ariz., anticipating opposition to that provision. “They’re here, and realistically there is nothing we can do to induce them all to return to their countries of origin.”

Apparently he snoozed through the positive effects of his own state’s immigration enforcement laws, where 100,000 illegal immigrants left Arizona after the state passed a law in 2007 that penalized businesses that hired them.

FYI to Juan McCain: It’s called “attrition” when the welcome mat is removed through tough enforcement and the illegal aliens then self-deport.

Below, a group photo of the nation shredders at the Gang of 8 presser. The G8 Senators are in the front, with a gaggle of other interested parties in the rear. Grover Norquist and top union guy Richard Trumka (w/moustache) can be seen on the far left. 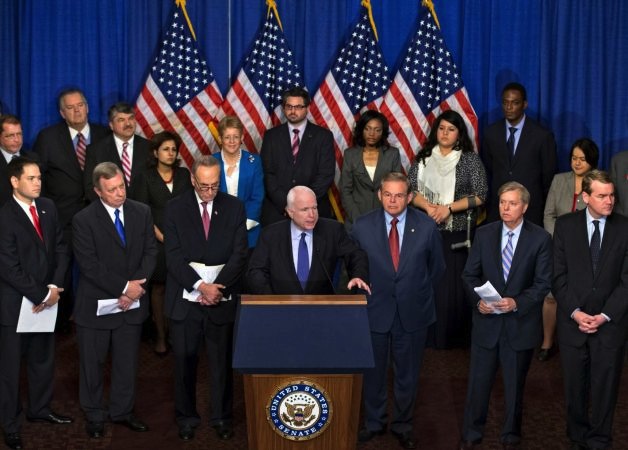