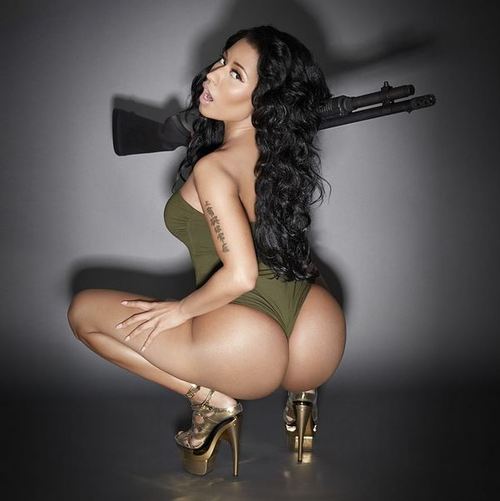 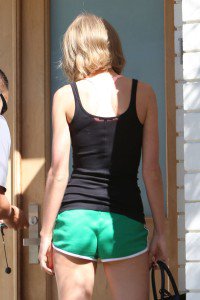 Neither James Kirkpatrick's nor Steve Sailer's post on the Nicki Minaj/Taylor Swift catfight was really gratuitous, or exploitative. This one is.  Steve Sailer suggested that this was an argument about "steatopygia", which means having a large, jutting backside, as seen in some African tribes, and to a certain extent in African-American women. A black commentator suggests here that word steatopygic, which means literally "fat-buttocked" is racist, and when white women have curvaceous backsides, we use the word "callipygian",  meaning "beautifully-buttocked".  (Taylor Swift, by comparison, looks charming but unspectacular from behind—see the picture at right, or this picture, which features leather shorts.)

Let us say, arguendo, that Ms. Minaj, pictured above holding what I believe is  a Mossberg 500 shotgun with extended magazine, is callipygian. These things are a matter of taste.   I see the picture cuts off Ms. Minaj's head—the full picture is here,  and a couple more, but Ms. Minaj's head is not germane here.  If we can say of a star like George Clooney that his face is his fortune, Ms. Minaj's  fortune is about three feet lower.

Which brings me to her video, Anaconda, which is NSFW because of much backside wiggling and language, including the N-Word.

And here's Taylor Swift's video, Bad Blood, which features mostly slender white women in bustiers, sports bras, and leather. (No use of the N-Word—Ms. Swift lacks the requisite privilege.)

Is there any point to this? No! That's what "gratuitous" means. I just thought you might want to know what all this is about.