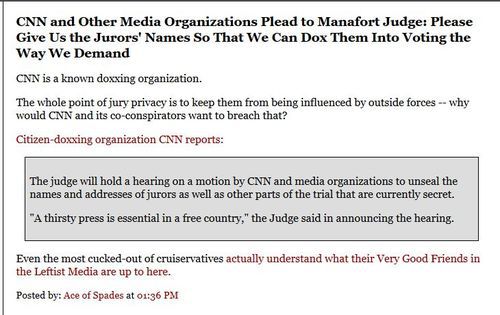 An interesting report over at Ace of Spades notes that CNN wants the judge to release the names and addresses of the jurors in Paul Manafort’s trial. [CNN and Other Media Organizations Plead to Manafort Judge: Please Give Us the Jurors' Names So That We Can Dox Them Into Voting the Way We Demand, Aug. 17, 2018]

I’m totally uninterested in Manafort except as a example of how far the Deep State and media torpedoes are willing to go in their attempt to undo the result of an election they lost.

And why would CNN want those names? As Ace notes, “even the most cucked-out of cruiservatives actually understand what their Very Good Friends in the Leftist Media are up to here.”

I’m reminded of this scene from the Sopranos, when Tony’s Uncle Junior was on trial.

“We know you’ll do the right thing,” Eugene Pontecorvo chillingly tells the juror.

And so does CNN.