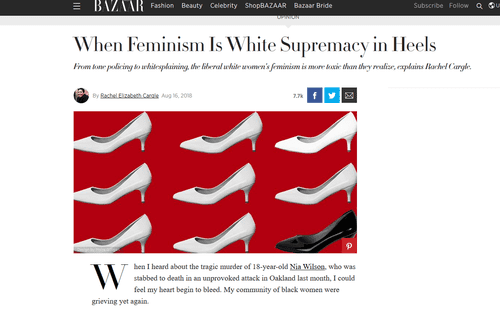 The War on Beckys Grinds on

When Feminism Is White Supremacy in Heels

From tone policing to whitesplaining, the liberal white women’s feminism is more toxic than they realize, explains Rachel Cargle.

When I heard about the tragic murder of 18-year-old Nia Wilson, who was stabbed to death in an unprovoked attack in Oakland last month, I could feel my heart begin to bleed. My community of black women were grieving yet again.

As we grappled with the realities of Nia’s death, I began to use Instagram to facilitate a discussion and flesh out questions like: How many more black women and girls must die before mainstream media considers it a worthy story to cover? How could they possibly take away her white male murderer so gently in handcuffs, while black men are thrown to the ground during traffic stops? Why aren’t the recorded wails of her mother and the tears of her father enough for the whole world to be demanding justice right now? And where are the voices of all my white feminist friends when a black woman had been tragically murdered?

Almost immediately, at my request, hundreds of commenters asked the white women who they saw as friends and leaders to use their platform to highlight the tragedy of Nia’s death with the same outrage of their black feminist allies. And many did—both demanding that justice be served while expressing their disbelief that such a story hadn’t gained national attention in the same way that Laci Peterson's or JonBenét Ramsey's had. But there were just as many white women—women whose bios claim titles like “social justice warrior” and “intersectional feminist”—that somehow took this call for solidarity as a personal attack.

Instead of sharing in the outrage of Nia’s brutal murder, they came with fury for being tagged in a post that they felt challenged their own perceived feminist accomplishments. There were grand displays of defensiveness, demands that they be acknowledged for all the things they had done for black people in the past, and a terrifying lashing out that included racial slurs and doxing.

The fragility of these women was not a surprise to me. In a crucial moment of showing up for our marginalized community, there was more concern about their feelings and ego as opposed to the fight forward for women as a whole. What could have been a much-needed and integral display of solidarity and true intersectionality quickly became a live play-by-play of the toxicity that white-centered feminism can bring to the table of activism.

And so forth and so on for quite awhile, such as