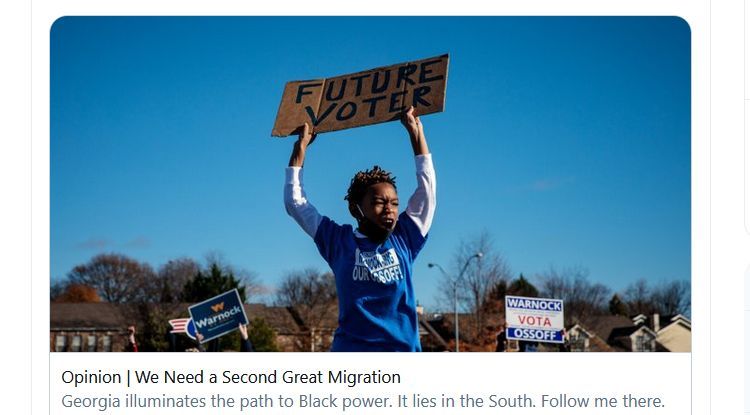 NYT Columnist Charles M. Blow Calls for the Medium-Sized Replacement—Back To The South!

From the New York Times opinion page, a piece that sounds like a parody I would write about how white metropolitan liberals’ deepest desire is to pawn the hot potato of their poor black neighbors off on white conservatives.

We Need a Second Great Migration 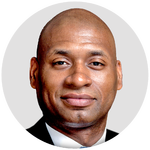 Georgia illuminates the path to Black power. It lies in the South. Follow me there.

ATLANTA — A year ago this week, I packed some bags and left New York City for Atlanta. …

But the exquisite fierceness of the city, its blur of ambition and ingenuity, didn’t hide the fact that many of my fellow Black New Yorkers were locked in perpetual oppression — geographically, economically and politically isolated. All around the North, Black power, if it existed, was mostly municipal, or confined to regional representation. Black people were not serving as the dominant force in electing governors or senators or securing Electoral College votes. …

Sure, I, Charles M. Blow, will admit that for the last half century, we Blacks dominated city government in a number of cities, such as Detroit, New Orleans, Gary, and East St. Louis. But it turned out that power wasn’t in Detroit, which white people somehow caused to shrink under its Black power government. Instead, the power must have been in Lansing the whole time.

I had an idea to change that. An idea about Black self-determination. Simply put, my proposition was this: that Black people reverse the Great Migration — the mass migration of millions of African-Americans largely from the rural South to cities primarily in the North and West that spanned from 1916 to 1970. That they return to the states where they had been at or near the majority after the Civil War, and to the states where Black people currently constitute large percentages of the population. In effect, Black people could colonize the states they would have controlled if they had not fled them. …

Perhaps most striking, the Warnock win was the first time in American history that a Black senator was popularly elected by a majority-Black coalition. It was a momentous flex of Black power.

… The Atlanta metro area saw an increase of 251,000 Black people between 2010 and 2016. In 2018, The Atlantic magazine described this area as the “epicenter of what demographers are calling the ‘reverse Great Migration’” of Black people to the South. …

This proposition is my big idea.

Many of the issues that have driven racial justice activists to organize and resist over the last few years — criminal justice, mass incarceration, voting rights and education and health policies — are controlled at the state level.

As everybody knows, it’s state troopers who do all the shootings of Blacks out on rural state highways, whereas Blacks never get shot by local police in Black run cities. Right? I mean, it has to work that way for my theory to make any sense. So, obviously, I, Charles M. Blow, am right about this.

The vast majority of people incarcerated in America, for example, are in state prisons: 1.3 million. Only about a sixth as many are in federal prisons.

And Blacks never get sent to city and county jails in black-ruled cities and counties, right?

States have natural resources and indigenous industries. Someone has to control who is granted the right to exploit, and profit from, those resources. Why not Black people?

I’m not sure that property law works quite like that, at least at the moment. But, no doubt, with enough power in the proper places, Changes Could Be Made.

Of course questions — and doubts — abound about such a proposal. Questions like: Isn’t the proposal racist on its face?

No. The point here is not to impose a new racial hierarchy, but to remove an existing one.

Also, Emmett Till would have supported my idea if he weren’t murdered by whiteness.

In a few years, my line should be incorporated into the new holy affirmation of wokeness that all schoolchildren will stand and recite daily: “Race does not exist but racism is everywhere.” If any child snickers, we will now he is a potential crimethinker, and steps can be taken.

After centuries of waiting for white majorities to overturn white supremacy, it has fallen to Black people to do it themselves.

I am unapologetically pro-Black, not because I believe in Black supremacy, which is as false and reckless a notion as white supremacy, but rather because I insist upon Black equity and equality.

In other words, I, Charles M. Blow, demand Black Privilege. But only temporary Black Privilege. How long? Well, how long between 1619 and the Racial Reckoning? 401 years? Okay, in 2422 maybe whites will have been punished long enough that they can then get equal rights back.

… Others have objected: Isn’t the North just better for Black people than the South?

… But racism is more evenly distributed across the country than we are willing to admit.

To be frank, racism isn’t much of a problem for Blacks anywhere compared to our own behavioral tendencies, but I, Charles M. Blow, am not paid to be frank.

It is true that in surveys, people in the North express support for fewer racially biased ideas than those in the South, but such surveys reveal only which biases people confess to, not the ones they subconsciously possess. So I asked the researchers at Project Implicit to run an analysis of their massive data set to see if there were regional differences in pro-white or anti-Black prejudice. The result, which one of the researchers described as “slightly surprising,” was that there was almost no difference in the level of bias between white people in the South and those in the Northeast or Midwest. (The bias of white people in the West was slightly lower.)

White people outside the South are more likely to say the right words, but many possess the same bigotry. Racism is everywhere.

Those Northern white liberals must be punished for their implicit racism by having their metro areas’ Black populations moved far away from them to the South. An exodus of Blacks from New York, Philadelphia, Chicago, Baltimore, Cleveland, and the District of Columbia will no doubt severely damage the quality of life and the property values of the white liberals left behind.

… Finally: Won’t this idea encounter powerful opposition, even from liberals?

Can you imagine how miserable life will be in Oakland, CA without its vibrant Black population? Oakland would be reduced to a post-apocalyptic wasteland if all the African-Americans who make it what it is today left.

Or how devastated liberal Los Angelenos would be if the Black neighborhoods currently condemned to live on that tragic dirt between Beverly Hills and LAX were suddenly emptied out by my vast exodus of Blacks to the Red States.

I, Charles M. Blow, call upon my liberal white allies in the Blue States to make this ultimate sacrifice and back my plan to colonize the Red States with the Urban Diversity that has done so much to enrich their lives. I know it will be tough for them to no longer have Black neighborhoods nearby, but sacrifices must be made.

Well, when has revolution ever been easy? When has a ruling class humbly handed over power or an insurgent class comfortably acquired it?

I know it will be rough for the white liberal population of northwest Washington D.C. when suddenly they wake up one morning and all the Blacks of northeast D.C. who lived within walking distance of the Capitol and Supreme Court have moved to Jackson, Mississippi as part of the Blow Plan.

Revolution, even a peaceful one, is frightening, and dangerous, because those with power will view any attempt at divestiture as an act of war.

But the white liberals of D.C. must try to be brave and face their Black-free future with whatever courage they can muster.

Washington D.C. liberals should think of how they will soon be able to stop paying $46,000 tuition at their young daughter’s Sidwell Friends School and instead just have her walk down the safe streets to the free neighborhood D.C. public school, which will suddenly have some of the highest test scores in the country.

Even some white liberals, those who call themselves allies, may shrink from the notion of Black power, drawing a false equivalence to the concept of racial superiority espoused by the white power movement. …

… I say to Black people: Return to the South, cast down your anchor and create an environment in which racial oppression has no place.

This is an adaptation from the forthcoming, “The Devil You Know: A Black Power Manifesto.”

Charles Blow joined The Times in 1994 and became an Opinion columnist in 2008. He is also a television commentator and writes often about politics, social justice and vulnerable communities. @CharlesMBlow • Facebook