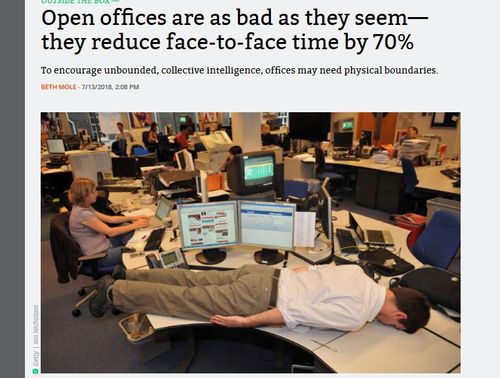 Anti-Bordersism Fails Again ... in the Office

Tearing down walls and cubicles in offices may actually build up more barriers to productivity and collaboration, according to a new study.

Employees at two Fortune 500 multinational companies saw face-to-face interaction time drop by about 70 percent, the use of email increase between 22 percent and 56 percent, and productivity slip after their traditional office spaces were converted to open floor plans—that is, ones without walls or cubicles that ostensibly create barriers to interaction. The findings, published recently in the Philosophical Transactions of the Royal Society B, suggest that removing physical dividers may, in fact, make it harder for employers to foster collaboration and collective intelligence among their employees.

Many companies have waged a so-called “war on walls” to try to create such vibrant workspaces, the authors Ethan Bernstein and Stephen Turban of Harvard wrote. But, “what they often get—as captured by a steady stream of news articles professing the death of the open office—is an open expanse of proximal employees choosing to isolate themselves as best they can (e.g. by wearing large headphones) while appearing to be as busy as possible (since everyone can see them).”

Similarly, when you go to an open house of a home for sale, the real estate lady always draws your attention to the Open Plan layout and you enthusiastically reply: This house is just one big room: it would be great for parties!

But of course I give parties about once every half-dozen years. What I really want in a house is a lot of small rooms where I can get away from distractions. For example, awhile ago I gave up my office for use as another bedroom and moved my computer to a folding coffee table in the walk-in closet of my bedroom. It’s great! I’m totally isolated, which is what I need to concentrate.