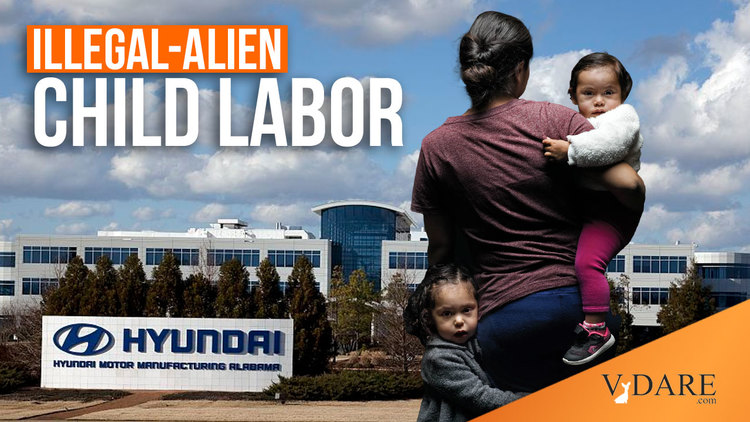 Child Labor, Hyundai, The Slave Power And The Zerg Rush At The Border

While the intent of the Obama and Biden open borders policy, an administrative amnesty invitation to every alien to cross our border with Mexico, is to replace the white population, the secondary intent is to provide illegal alien child labor for the Slave Power, this time Korea‘s chaebol. Korean businesses are notorious for bad labor relations as well as for exploiting labor by driving down wages at every opportunity.

That is why Korean labor strikes are so violent and common. Korean businessmen just don’t want to pay fair wages. Of course, they are caught between low-cost China and super-efficient robotic Japan, so chaebol have to be innovative to stay in business.

One of their innovations, or, more accurately, a return to a policy from the old days, is the use of illegal child labor, and not just any child labor, but illegal alien child labor, all helpfully provided by the Obama and Biden Regimes, as well as open-border alien smuggling groups like Pueblo Sin Fronteras.

In this satanic combination of greed, villainy, and anti-white racism, rapacious capitalists from the Slave Power combine with neo-Marxist ethnic groups to increase profits, exploit children, and destroy America. Essentially the wet dream of Alexandro Mayorkas, as well as those on his watch, and his ilk: profits and the destruction of the Historic American Nation.

The truth behind the zerg rush at the border is destruction and profits. All these illegal aliens have to do something, and the Slave Power wants cheap labor, whether for fly-by-night slaughter houses or car parts manufacturers, it does not matter. And now it is not just cheap adult illegal labor, but illegal alien child labor.

A subsidiary of Hyundai Motor Co has used child labor at a plant that supplies parts for the Korean carmaker’s assembly line in nearby Montgomery, Alabama, according to area police, the family of three underage workers, and eight former and current employees of the factory.

Underage workers, in some cases as young as 12, have recently worked at a metal stamping plant operated by SMART Alabama LLC, these people said. SMART, listed by Hyundai in corporate filings as a majority-owned unit, supplies parts for some of the most popular cars and SUVs built by the automaker in Montgomery, its flagship U.S. assembly plant.

Per the usual practice, Hyundai and its subsidiary, SMART, deny any responsibility, blaming the usual labor contractors, the cut-out used by employers to “legally” employ illegal aliens.

SMART, in a separate statement, said it follows federal, state and local laws and “denies any allegation that it knowingly employed anyone who is ineligible for employment.” The company said it relies on temporary work agencies to fill jobs and expects “these agencies to follow the law in recruiting, hiring, and placing workers on its premises.”

Readers will likely recall the Tesla issue with East European labor contractors providing illegal aliens that built the expanded Tesla facility in Fremont, CA. Such labor contractor practices are most common in agricultural Slave Power, but the idea of using a labor contractor cut-out to protect oneself from liability in hiring illegal aliens soon spread to more respectable industries, even those that usually rely on hiring their own employees rather than contractors. And in the cutthroat auto industry, pennies saved on labor give one a significant cost advantage in the auto sales lot, something that the Korean manufacturers need to do to beat Japanese and American manufacturers with their in-house employees and robots.

The result is employers are all in for the zerg rush at the border because it is supplying the cheapest of cheap labor, 12-year-old indios stamping out car parts. And they don’t have to worry about any ICE SVU raids, as Alexandro Mayorkas has assured the Slave Power that no immigration raids will occur on his watch.