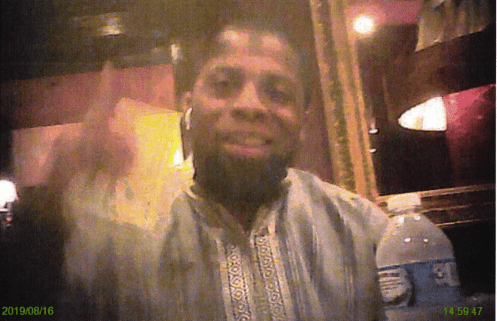 Via Mark Pitcavage on Twitter, a tale of two generations of Chicago blacks who hate America.

The reputed leader of a street gang in the western suburbs has been charged with directing money to the Islamic State and plotting to travel overseas to fight with the terrorist group.

CBS explains it this way:

Jason Brown, also known as Abdul Ja’Me, attempted to provide $500 in support of ISIS three separate times in 2019, according to a criminal complaint filed in U.S. District Court.

Brown is alleged to have given the money to a confidential source, believing it would be sent to an ISIS soldier in combat in Syria, but who was actually an undercover law enforcement officer.

According to the criminal complaint, Brown, 37, is believed to be the leader of the AHK street gang based in west suburban Bellwood, known to traffic narcotics in the Chicago area.

He is also accused of using this position of power to recruit and radicalize AHK members to support ISIS, requiring all members to convert to Islam if they aren’t already Muslim.

I know this sounds like the entrapment scams that that FBI pulls on white dissidents, but Jason Brown is not a harmless patriot, he's a black Muslim gangbanger.

Anyhow, Pitcavage, an ADL guy who is actually an "Expert on right-wing extremism" according to his Twitter bio,  was reminded of a similar incident in the 80s, when the El Rukn gang—also American blacks from Chicago—wanted to support Gaddafi. (One about thirty variant spellings of the former Libyan strongman's name, see Whoever Picked Qadhdhafi, Give Your Head A Shake )

CHICAGO (AP) _ A federal jury convicted five members of the notorious El Rukn street gang Tuesday of conspiring to blow up airplanes and government buildings as part of a terrorism-for-hire scheme to win $2.5 million from Libya.

The jury in U.S. District Judge Charles Norgle’s courtroom returned the verdict after six days of deliberation, which followed a five-week trial.

Jeff Fort, El Rukn leader, and co-defendants Leon McAnderson, Reico Cranshaw, Alan Knox and Roosevelt Hawkins had contended the El Rukns were a religious organization that planned no violence and met with the Libyans only to raise money for a mosque....

According to the indictments, several members of the gang traveled to Libya, Panama and several other locations and offered ″their services″ to Libyan representatives in 1986, hoping to get as much as $2.5 million in exchange.

The AP story doesn't use the words black, Muslim, or Islam in its coverage, because that's the Associated Press's religion, but "black" and "Muslim" are the two factors in this kind of terrorism, which is based in communities that hate America.

It goes back farther than that, if you know history: see Black Disloyalty During World War II—Anti-White "Activists" In Harlem Supported Both Germany And Japan