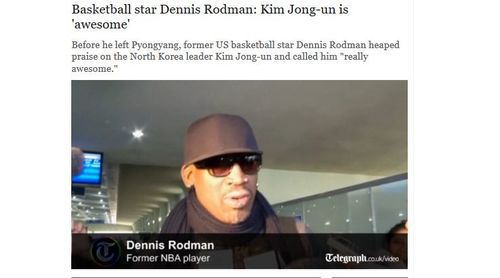 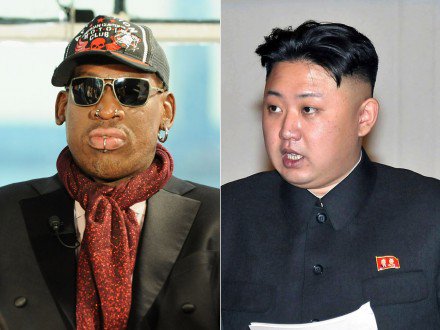 On his return, Mr. Rodman had things to tell us. What things? Listen for yourself.

[Clip: "His grandfather and his father were great leaders. He's such a proud man. He's proud; his country like him; not like him, love him … I love him. The guy's awesome.]

You might be wondering: What is it with American blacks and commie dictators? Before  Rodman swooned over Kim Jong-un there was Jesse Jackson dropping trou for Fidel Castro, quote: "Castro is the most honest and courageous politician I've ever met," end quote. That was in 1984. Thirty years before that there was Paul Robeson kissing up to Stalin and praising the Soviet suppression of Hungary's 1956 uprising. The operative principle here is: My enemy's enemy is my friend. A lot of blacks think of America as their enemy. Since the U.S.S.R., Castro's Cuba, and North Korea are or were all enemies of the U.S.A., they must ipso facto be friends of the colored folk.

It actually goes back even further, to World War II, during which Nation of Islam founder Elijah Muhammad spent the war in behind bars in a Federal prison because he supported the Japanese side.

Muhammad hated the United States and loved its enemies, especially non-Caucasian ones. And so he rejoiced in the Japanese victory at Pearl Harbor in 1941, not only refusing to register for military service but instructing his followers to do likewise. Arrested for draft evasion in May 1942, he spent three years in jail on sedition charges, getting out in August 1946. [How Elijah Muhammad Won, By Daniel Pipes, Commentary Magazine June 2000 ] 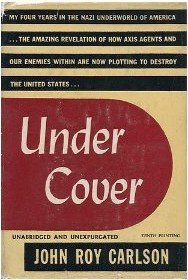 Amateur Nazi hunter "John Roy Carlson" reported that there were pro-Nazi fringe groups in Harlem. See Under Cover: My Four Years in the Nazi Underworld of America

In 2013, almost 70 years after Hitler's death, being an amateur Nazi hunter is a sign of severe mental illness. During the Second World War, however, there were actual Nazis, Fascists, and Japanese Nationalists among America's immigrant population—including, as Carlson saw for himself, among black immigrants from the British West Indies.

The reactions of the Nazis and the evil Empire of Japan to these overtures from America's black population were somewhat tepid.

The phrase "he's just not that into you" describes the Nazis' reaction to groups like The Ethiopian Pacific League, whereas the Japanese, for their part, were appalled that anyone could consider them a "colored race" in the same sense that American blacks were.

As in the case of Elijah Muhammad, authorities cracked down:

The Milwaukee Journal story says that there was testimony about sedition from "Two Negro detectives, members of the police alien squad..."

Just think, in the 1940s, the NYPD had an "alien squad"! It was formally known as the "Criminal Alien Bureau", and it used to be that lots of police forces had them.

However, if you read Carlson's book, you'll see that the point is the same that Derb made—having decided that they didn't like America, many blacks felt that they did like America's enemies—even when they were Nazis.

Does this have a larger public policy point? Yes, it does. Remember who's president? The guy seen here bowing to the current Emperor of Japan. 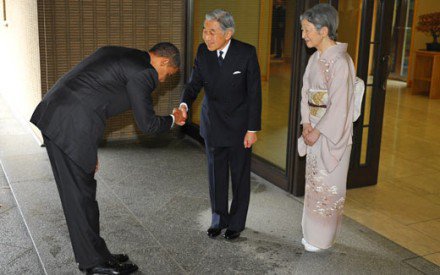 (He's also been seen doing this to the Saudi monarch, and others.)

In 2009 post titled Why Obama Likes Bowing To Colored Monarchs, Patrick Cleburne quoted a blogger to the effect that

one of the many things that motivated Obama to bow to the present emperor of Japan was to make up just a tiny bit for the terrible humiliation the previous emperor received at the hands of the United States, which had the effrontery to win a war that the Japanese began by their sneak attack on Pearl Harbor.

That's why this history is important—because in foreign policy, President Obama feels the same way as the Harlem Nazis.

He's not a secret Nazi, any more than he's a secret Muslim or secret Communist. He's openly anti-American, based on his specifically racial feelings towards the United States and its white majority. That's why all the bowing and apologizing for America's (white) past.

James Fulford (Email him) is a writer and editor for VDARE.com.