A couple days ago, Tucker Carlson used the instance of how a non-English-speaking immigrant nevertheless was allowed to become an American citizen (Carlson And CIS’s Camarota On Language Non-Assimilation: 45 Percent Of California Household Don’t Speak English At Home). Tucker opened the segment by observing, “An immigrant woman in California was recently able to obtain American citizenship despite having, by her own description, no ability to read or write English.”

Jovita Mendez, an immigrant from Mexico, proudly announced in Spanish to NBC San Diego her achievement of obtaining U.S. citizenship.

“I didn’t think that I would be able to accomplish this, but I did it,” Mendez told NBC in Spanish. “I did it because my kids are here. They told me I needed to do this for myself, to have a future here.”

As the NBC San Diego article reveals, rather than bothering to learn English during her 20 years of residence in the US, Mendez cheated by memorizing the questions and answers to the test (‘I Did It’: San Diego Mother Who Can’t Read or Write Earns US Citizenship):

Encouraged by her children, Mendez decided to take the test. She took classes led by local Maribel Solache.

Solache told Mendez that the language barrier and not being able to read or write didn’t mean she couldn’t become a citizen. She just needed to be sure of herself. [. . .]

Mendez said Solache would read the civics questions to her several hours each week, and she would repeat each word three to four times until she memorized everything.

Maribel Solache is an interesting sort of teacher, perhaps typical of the Hispanics who seek to increase their influence in the US by increasing their numbers on the voting rolls by any means necessary. Judging from a 2014 photo, she is a racist who hates America: 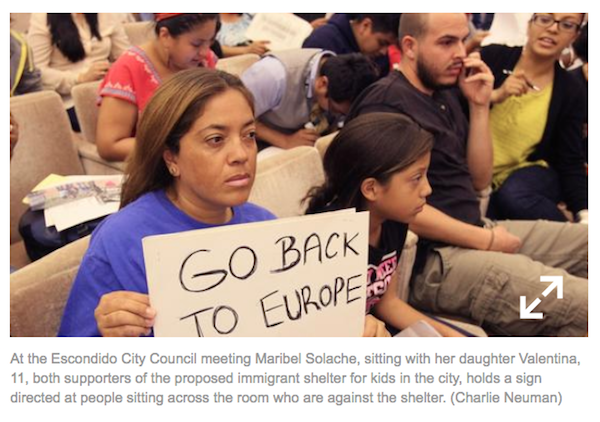 The circumstance of the photo was a San Diego council meeting to decide whether a vacant nursing home would be turned into a shelter for unaccompanied illegal alien children (Immigrant shelter rejected by Escondido, San Diego Union Tribune, October 15, 2014).

So clearly Solache has a big dose of Hispanic privilege, to say the least, yet she is tutoring newbies about how to become Americans. No wonder assimilation is failing so badly.