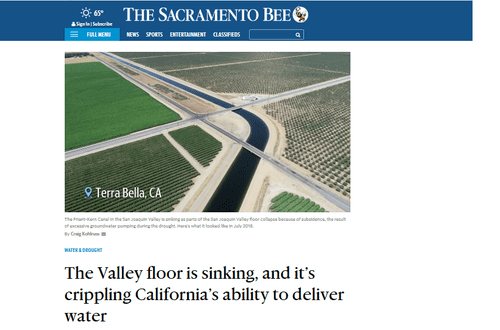 Water supply continues to be a worrisome thing in California, where the memory of the historic five-year drought remains strong. Now we learn that the drought plus overuse of groundwater has caused so much subsidence in the Central Valley that a large stretch of a gravity-run canal no longer works.

California’s land subsidence has been worsening for years, and the ground apparently hasn’t stopped sinking just because we’ve had a couple years with rain.

The state is environmentally overpopulated at nearly 40 million persons, particularly regarding water. Plus, California has the nation’s highest proportion of foreign-born at 27 percent.

Below, the Sacramento Bee front-paged the canal-failure story a few days ago, because water supply is serious news in California. 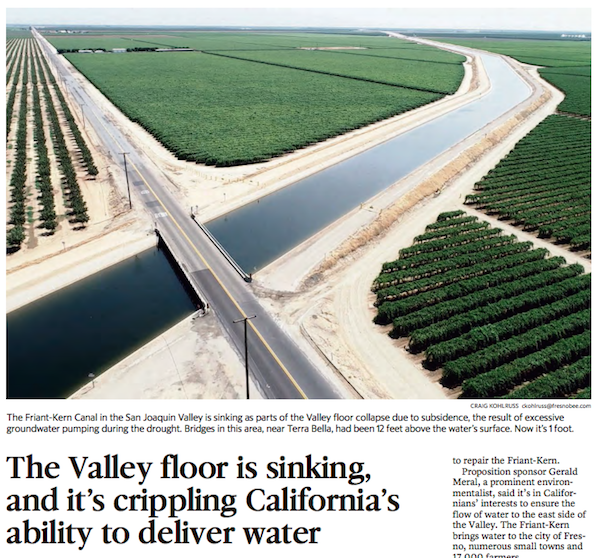 Completed during Harry Truman’s presidency, the Friant-Kern Canal has been a workhorse in California’s elaborate man-made water-delivery network. It’s a low-tech concrete marvel that operates purely on gravity, capable of efficiently piping billions of gallons of water to cities and farms on a 152-mile journey along the east side of the fertile San Joaquin Valley.

The Friant-Kern has been crippled by a phenomenon known as subsidence. The canal is sinking as the Valley floor beneath it slowly caves in, brought down by years of groundwater extraction by the region’s farmers.

Along a 25-mile stretch of Tulare County rich with grapevines and pistachio trees, the canal has fallen so far — a dozen feet since it opened in 1951 — that it has lost more than half of its carrying capacity downstream from the choke point. Water simply can’t get through like it’s supposed to.

“It ponds up; you lose capacity and that ability to move water through the system,” said Douglas DeFlitch, chief operating officer at the Friant Water Authority. The authority operates the canal for the U.S. Bureau of Reclamation’s Central Valley Project.

Although subsidence has been a problem for decades, it accelerated as groundwater pumping expanded during the recent drought. Now it’s reaching a crisis point on the Friant-Kern, and California voters are being asked to fix it.

A proposition on the November ballot would raise billions of dollars for a variety of water projects around the state, including roughly $350 million to repair the Friant-Kern.

Proposition sponsor Gerald Meral, a prominent environmentalist, said it’s in Californians’ interests to ensure the flow of water to the east side of the Valley. The Friant-Kern brings water to the city of Fresno, numerous small towns and 17,000 farmers.

“Keeping 1 million acres of land in the Friant service area (in production) is a public good,” said Meral, a former deputy secretary of the state Natural Resources Agency.

So far no organized opposition has emerged to Meral’s proposition.

The Friant-Kern’s woes illustrate the enduring nature of California’s water problems. The epic five-year drought is officially over, but not everywhere. Gov. Jerry Brown’s 2017 declaration ending the drought omitted four counties where groundwater has been severely depleted: Fresno, Tulare, Kings and Tuolumne. The stricken canal serves two of those counties, Fresno and Tulare, along with Kern County.

It’s a problem that feeds on itself. If the canal can’t do its job, farmers downstream likely will pump more groundwater during dry years. A 2014 state law, the Sustainable Groundwater Management Act, requires farmers to rein in their pumping, but the restrictions don’t fully kick in until 2040. Because farmers use some of the water from the canal to replenish groundwater, fixing the Friant-Kern would help coax the aquifers back to health.

During the drought, groundwater became a lifeline in this part of the Valley. Friant area farmers normally get water from the San Joaquin River, stored behind Friant Dam, but reservoir levels fell so low that the Central Valley Project didn’t deliver a drop of river water to Friant farmers in 2014 and 2015.