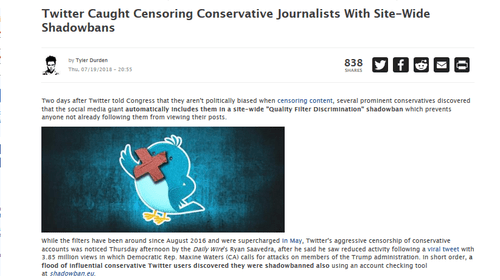 Twitter's QFD Ban On Dissident Sites (Including VDARE.com) And How To Avoid It

If you follow VDARE.com on Twitter you probably see our Tweets, but you may not be seeing Tweets by  other Dissident Right sites, because of something called the QFD Shadowban. An article called Twitter Caught Censoring Conservative Journalists With Site-Wide Shadowbans [by Tyler Durden ZeroHedge, July 19, 2018] explains.

ZeroHedge links to a tool called shadowban.eu  which can test to see if your own Twitter feed is placed under this ban:

Two days after Twitter told Congress that they aren't politically biased when censoring content, several prominent conservatives discovered that the social media giant automatically includes them in a site-wide "Quality Filter Discrimination" shadowban which prevents anyone not already following them from viewing their posts.

While the filters have been around since August 2016 and were supercharged in May, Twitter's aggressive censorship of conservative accounts was noticed Thursday afternoon by the Daily Wire's Ryan Saavedra, after he said he saw reduced activity following a viral tweet with 3.85 million views in which Democratic Rep. Maxine Waters (CA) calls for attacks on members of the Trump administration. In short order, a flood of influential conservative Twitter users discovered they were shadowbanned also using an account checking tool at shadowban.eu.

This applies  to us here at VDARE.com: 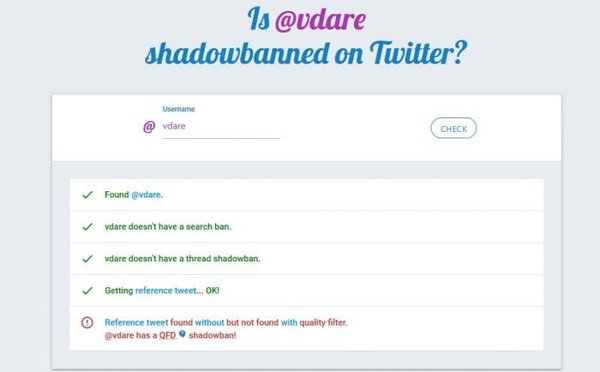 What this means in practical terms is that newish accounts and anyone with the Quality Filter turned on (it's on by default and most people don't even know it exists) won't see most of my tweets, or the tweets of anyone else who's QFD shadowbanned.

This setting is supposed to protect you from seeing bots and harassment, but it also "protects" you from conservative sites. Breitbart explained how to remove the setting from your own account in 2016--go here for the explanation. This won't ensure other people see you, but will allow you to see things Twitter doesn't really approve of. Oh, and follow @vdare.com.