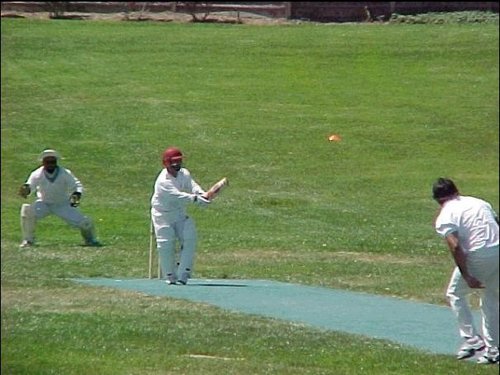 California: Cricket (the Sport) Expands with Growth of Indian Immigrants

Monday’s San Francisco Chronicle has an article that’s an immigration two-fer. The paper’s front page shows an Indian immigrant kid playing cricket in an East Bay suburb, because what foreigner wants to play baseball in America any more? Assimilation would be too much to ask of today’s diverse global citizens, and anyway it might hurt their delicate self-esteem. 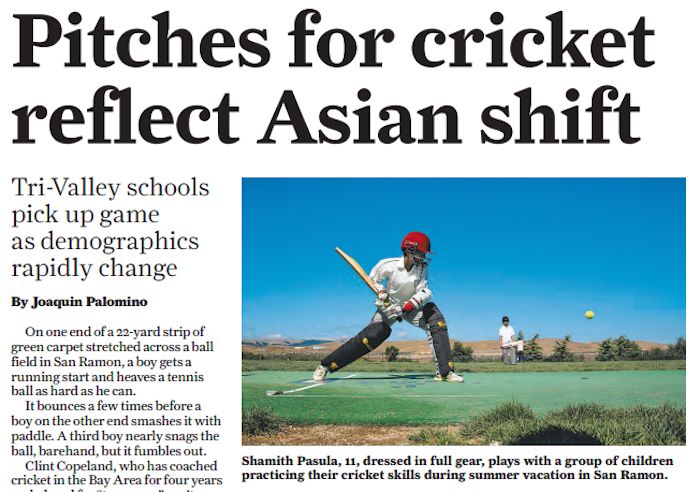 In addition, the story includes photos of hills near existing suburbs being prepared for more housing to be built, with no mention of the severe drought that has plagued California for years.

Below, East Bay development. Chronicle caption: “Development continues in the Tri-Valley with grading along Tassajara Road for more homes in East Dublin near San Ramon. The region is now a booming suburb that’s home to thousands of new Asian residents.” 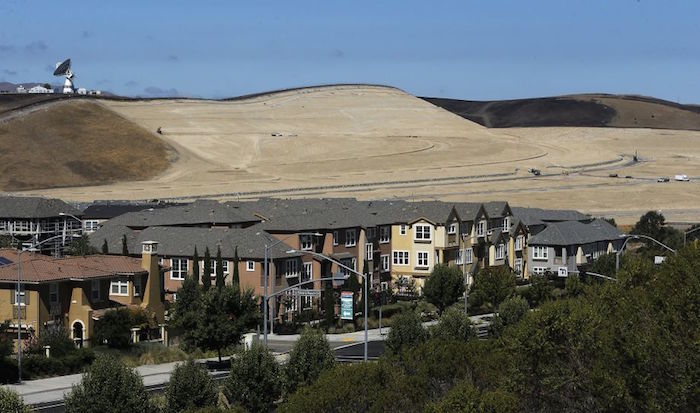 The Chronicle has had plenty of drought coverage, but the paper seems incapable of connecting the dots between immigration-fueled population growth and a diminishing water supply. More people means more water users. In fact, it was a big story in the past week that state residents had cut their water use by 31 percent in July.

Have citizens been convinced by government to let their lawns die so developers can get rich by importing thousands of immigrants during a historic drought? That’s what it looks like.

And there are quite a number of new water-using cricket fans from India, as we learn in lower paragraphs: San Ramon’s Indian population increased 600 percent from 2000 to 2013, reaching 9,720 in the latter year.

Local citizens have tried to limit development through the initiative process, with some successes. Still, there’s plenty of agricultural land that remains unpaved, and developers intend to change that by constructing some nice expensive $uburb$ for immigrant$. Cha-ching!

On one end of a 22-yard strip of green carpet stretched across a ball field in San Ramon, a boy gets a running start and heaves a tennis ball as hard as he can.

It bounces a few times before a boy on the other end smashes it with paddle. A third boy nearly snags the ball, barehand, but it fumbles out.

Clint Copeland, who has coached cricket in the Bay Area for four years and played for “too many,” can’t contain his joy. “Nice shot, great bowl, good effort,” he yells. “I enjoy it more than they do. How can you not enjoy it when you see a kid do that?”

Cricket is growing in California, especially in the Tri-Valley, which encompasses the cities of San Ramon, Pleasanton, Dublin, Danville and Livermore.

The sport is so popular at Fallon Middle School in Dublin and Harvest Park Middle School in Pleasanton that both plan to field cricket clubs this year, making them among the first schools in the Bay Area — possibly the state — to offer the sport.

“People are playing in Fremont, Cupertino, San Jose and Milpitas,” Copeland said. “But not in the schools.”

After Labor Day, the Tri-Valley could make history: Fallon and Harvest Park are preparing for what Copeland calls California’s first interschool cricket match. Other schools may also join, elevating it from a game to a tournament.

The proliferation of the sport, which was born in Britain and became hugely popular in South Asia in the colonial era, is just one indicator of changing times — and changing demographics — in the Tri-Valley. Once a collection of small, rural and largely white towns, the region is now a booming suburb that’s home to thousands of new Asian residents.

Since 1980, the percentage of Asians living in Pleasanton more or less doubled every decade — from 2.5 to 5.6 to 11.7 to 23.1 percent of the population in 2010. Proportionally, Pleasanton’s Asian community was almost twice as large as that of Los Angeles in 2013.

A growing community While most of the new residents were born abroad, the influx into the East Bay suburb bucks past trends, in which immigrants typically landed in homogeneous, urban enclaves. Drawn to jobs in tech, many have advanced degrees and solid salaries. “We’re not talking about a Chinatown or Japantown type of segregation,” said David Woo, an associate professor of geography and environmental studies at Cal State East Bay. “These are English speakers who move into white neighborhoods and integrate.”

The changing populations have altered the fabric of the community. Patel Groceries, an Indian grocery store, opened in San Ramon in 2011 and has been packed ever since, and the small city is home to the Indian Community Church of the Valley, one of the Bay Area’s few Christian houses of worship catering specifically to South Asians.

Though not as avid cricket players, immigrants from East Asia are also moving in.

On most Sundays from 9 a.m. to 1 p.m., the Chinese American Cooperation Council sets up in Pleasanton’s Amador Valley High School, where hundreds of families converge to study Chinese language, play badminton and learn calligraphy. The small school went from less than 300 registered students to 1,200 since 2003, according to Jun Xue, president of the council.

New businesses are also popping up. Next spring construction is scheduled to begin on a new shopping center in Pleasanton that will house an Asian food court. Two 99 Ranch supermarkets, a chain of Asian grocers, have opened since 2007 — one replacing an old Ralph’s.

One of the more symbolic cultural shifts has been the onset of cricket and, to a certain extent, the waning interest in baseball — long a staple of suburban America. San Ramon’s two cricket pitches are busier than the city’s many baseball diamonds.

Residents are so passionate about cricket that when the City Council considered limiting playing hours at Monarch Park in 2010, nearly 300 people signed an online petition in protest. One man even told the council that he moved to the small city partially because of the cricket field, a rarity in the region, news website Patch reported.

A few years after the heated debate, the city decided to erect a second pitch for players.

“There are probably more cricket fields here than in any other Bay Area community,” said San Ramon Mayor Bill Clarkson. “The city has gone to a great extent to make them feel welcome.”

Cricket in the schools While the sport has been popular among adults for a few years, it recently started catching on with kids.

On a warm summer afternoon in mid-August, about 100 people convened at Windemere Ranch Middle School. A group of adults played on the main pitch, while dozens of kids ran around with food and trophies in hand — some trickled onto a nearby basketball court and set up an ad-hoc cricket game.

It was the last day of the youth summer league, and families from all over the Tri-Valley came to support the sport.

“It’s bringing my childhood memories back,” said Sathya Raghavendran, an avid cricket fan whose son played in the league. “We were born in India, and we came here to work, but these kids were born here. If you don’t get them involved in cricket, that excitement is going to die with us.”

The closing ceremony marked the end of summer league, but due to the school programs the sport will continue in the fall and winter.

Harvest Park Middle School is still working out the details of its cricket club. Fallon Middle School started a club last spring, which grew from three students to 45 over the course of the year. Due to that uptick, all students will spend three weeks playing the sport this year in gym class, according to Chandu Krishna Giri, Fallon’s coach.

“We didn’t do any marketing, we didn’t put out any flyers, we didn’t put up any banners; all we did was play,” he said. “And every week a child would come and ask if they could try.”

Vivek Krishna Giri, 11, Chandu’s son, will represent Fallon in the interschool competition in September. He plays in cricket tournaments across the globe — Dallas, New Jersey and the Caribbean — but is most excited about spreading the game in the Tri-Valley.

“I want to promote cricket so more people can see the sport I love,” he said.