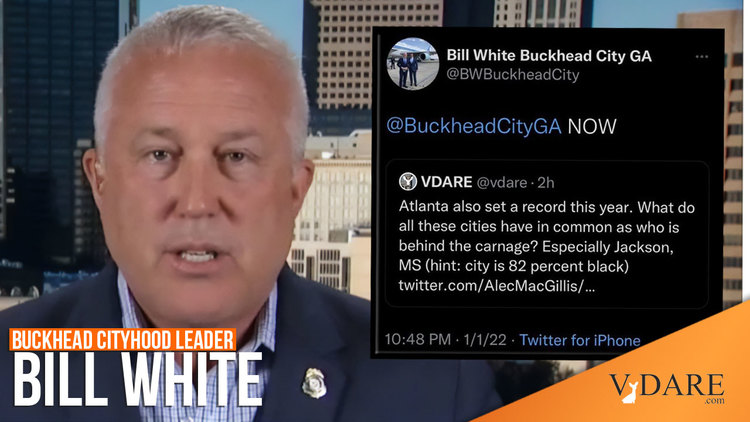 Bill White is a secessionist. He doesn't want to separate Georgia, where he lives, from the US, the way the Confederates did, he wants to separate his majority-white suburb of Buckhead from the majority-black city, under long-time black rule, of Atlanta, GA.

This is unpopular with the local MSM and that's why two reporters were required to write a story about him Tweeting and deleting something we said about the crime rate in Atlanta:

This led to numerous other stories about this Tweet from internet echo chamber: Buckhead City movement leader receives backlash after posting controversial tweet, Buckhead Secessionist Wants Us To Believe He Didn’t Know He Was Retweeting A White Supremacist and Trump pal who's trying to split up Atlanta busted for white nationalist tweet: 'I am not perfect' 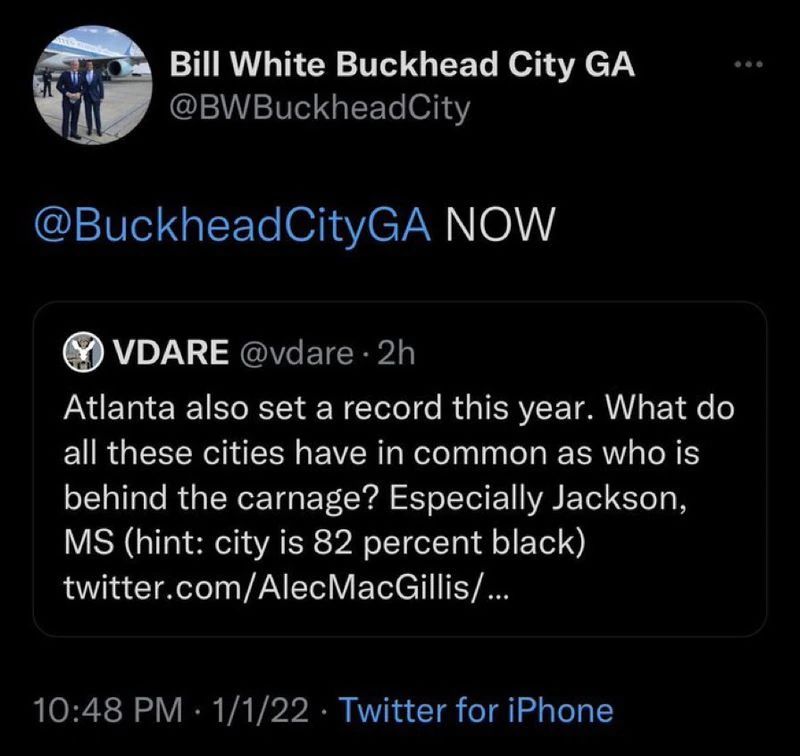 Atlanta also set a record this year. What do all these cities have in common as who is behind the carnage? Especially Jackson, MS (hint: city is 82 percent black) https://t.co/smbjjCYO9r

According to the Atlanta Journal-Constitution, above, Bill White immediately grovelled:

The leader of the effort to carve out a new city of Buckhead tweeted and then deleted a social media post from a blog associated with white nationalists and anti-Semites, triggering condemnation from critics who oppose his efforts to split Atlanta.

Bill White, a wealthy New York transplant who has become the face of the cityhood initiative, remarked “@BuckheadCityGA Now” on a Twitter post from the VDARE account that equated majority-Black cities with “carnage” and crime.

White deleted the post hours later after it drew rebukes from civil rights leaders, Atlanta officials and Democratic legislators. He told The Atlanta Journal-Constitution he regretted amplifying a “nasty” comment from the account.

“I am not perfect and simply retweeted something too fast,” said White, who heads the Buckhead City Committee. “I’m sure I won’t be the first or the last person on Twitter to do that.” [Emphases added.]

First of all, there's nothing wrong with either what we said, or Bill White retweeting it. And if people aren't equating majority black cities with carnage and crime, they haven't been paying attention, not only for the past two years, but ever.

And what we were Tweeting was about the wild rise of crime in a lot of black cities, including the Atlanta that Mr. White wants to disentangle himself from. This includes the traditonal "Black-Run America" levels of incompetence and corruption in Atlanta which Mr. White must have Noticed. (In fact he did Notice, he just didn't comment.)

⁦@TuckerCarlson⁩ FYI. This was his first day in office. https://t.co/UqHUMLi8yw

I assume the citizens of Buckhead are tired of living under (and paying for) that system, and want to assert local majority rule.

And no one should be apologizing, it doesn't help! If you read the AJC piece, it's got a list of all the things that we've been accused of by accusing accusers over the years, which White is not responsible for, any more than we, in quoting the AJC, are responsible for their multiple sins of omission and commission over the years.

But we don't concede, ourselves, that what we're doing is evil—what we do, and what the AJC doesn't do, is print the truth about crime, including black crime, which is how White found himself retweeting us rather than a frontpage "Atlanta Crime Crisis" piece from the AJC—as far as I know, there isn't one.

The AJC, above, not only refuses to report it, but acts as if majority-black cities don't have a crime problem.

Bill White shouldn't be conceding anything, either.

If white Americans don't stop cringing when accused of "racism", they'll never get anywhere. Truth is an absolute defense to this charge. Atlanta is corrupt, crime-ridden, and black-ruled, as you can see from MSM coverage, although you have to read between the lines[Why Did Keisha Lance Bottoms Quit? The mayor of Atlanta was a rising star in Democratic politics. Then the crime wave hit, by Zak Cheney-Rice, January 3, 2022].

White Americans need to get the courage to say these things.