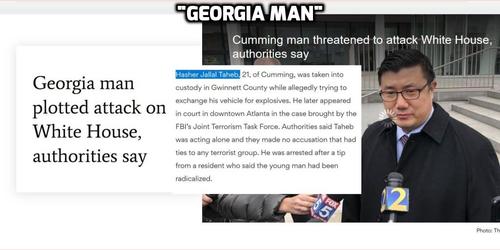 Federal authorities on Wednesday arrested a metro Atlanta man they said was plotting to attack the White House but instead got entangled with the FBI.

Taheb’s alleged attack on the White House was supposed to take place around Thursday and involve various explosives and firearms, though even days before he claimed he had still never fired a gun in his life, according to the criminal complaint. He said he could learn fast, the document said.Authorities also said he planned to travel to the Islamic State territory but acknowledged he didn’t have a passport.

We don't know, because no one is saying, whether "Georgia Man" Taheb is really "Middle East Man", "Black American Muslim Man", or "Actual Georgia Man" who converted to Islam.

The authorities aren't saying, and the MSM operatives at the press conference, are, as usual, not shouting the question at the FBI guy the way you or I would.