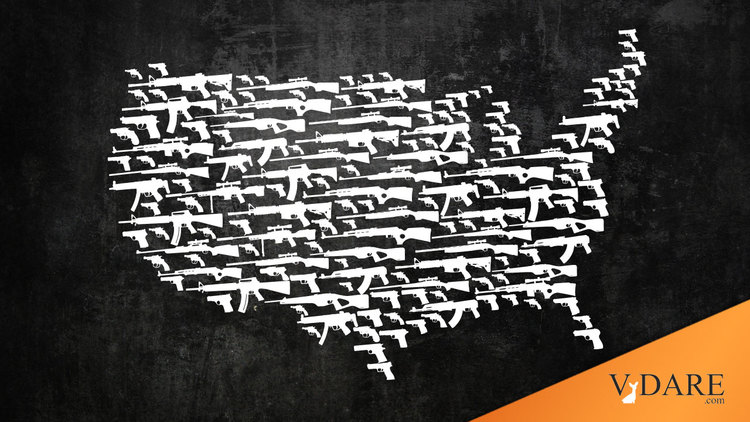 Gun Homicides By Race By State

Adapted by me from CNN in 2018, these are gun homicide victimization rates based on CDC data summarizing death certificates from 2008-2016. (These are not perpetration rates.)

Interestingly, there’s almost no correlation (only 0.08) between white and black homicide victimization rates by state. For example, Illinois has law-abiding whites and shooty blacks, while Texas whites get themselves shot dead at above white average rates while Texas blacks get killed less than the black average.

The point of this study in the Annals of Internal Medicine is to promote gun control policy, but the low correlation between the races suggests state laws aren’t terribly important, otherwise you’d expect to see a higher correlation.

The disparities in how black and white men die in gun violence, state by state

Study: Black and white men in the US face different rates of firearm homicide and suicide

These differences vary by state, the study finds

… The research, published in the Annals of Internal Medicine on Monday, measures drastic differences in how black and white men experience fatal gun violence in the United States.

From the Annals of Internal Medicine:

So, there are some big differences between state in the likelihood that white men will get shot dead.

Presumably, some of the differences in white homicide victimization rates between Massachusetts and Mississippi are due to more Mississippi whites being shot by blacks than Massachusetts whites, since blacks make up a much higher percentage of the population in Mississippi and are somewhat more shooty. I don’t know how to estimate the impact of that factor, though. Any suggestions?

And here are the same numbers sorted by black gun homicide victimization rates:

Blacks tend to have low rates of getting themselves shot dead where there aren’t too many blacks. But Texas has an impressively low rate for a fairly big black population.

In this time period (2008-2016), black rates of getting shot were worst in Rust Belt states with big urban black populations.

I wonder how much this is changing? My vague impression from looking at the 2021 numbers for big cities for my upcoming Taki’s article is that, lately, Southern blacks are running into trouble. But the CDC and the FBI are about 9 months away from releasing their data for 2021.

One of the missing states in this analysis is Hawaii, which may well have the lowest black homicide rate. Most blacks in Hawaii got there through the military and thus low quality is screened out, or are eccentrics who think Hawaii sounds cool and aren’t into ‘hood culture.