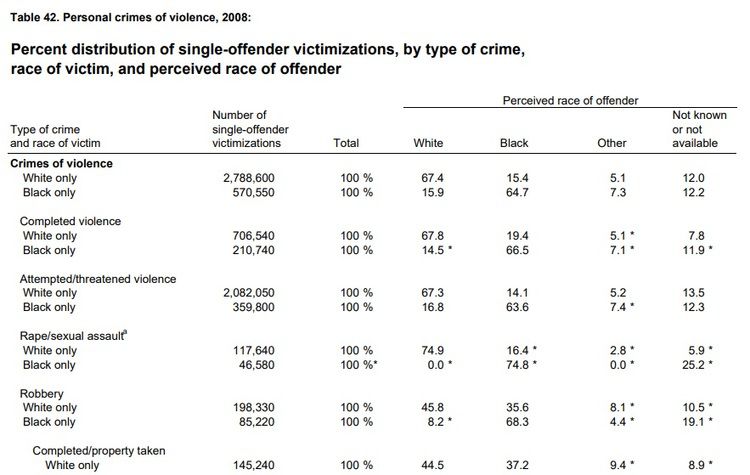 Bring Back Table 42!—Time For The Trump Administration To Restore The DOJ's Black-On-White Crime Statistics Page

James Fulford's article above mentioned Jared Taylor's statement in his article on the Arbery case, that a black person is nearly 30 times more likely to attack a white person than vice versa.

On the subject of America's crime statistics, the current administration has done nothing to restore the famous Table 42 in the Bureau of Justice Statistics website.

If you don't know about Table 42, it is the one headed "Percent distribution of single-offender victimizations, based on race of victims, by type of crime and perceived race of offender" in the "Victims and Offenders" list at the BJS web page "Criminal Victimization In The United States — Statistical Tables." 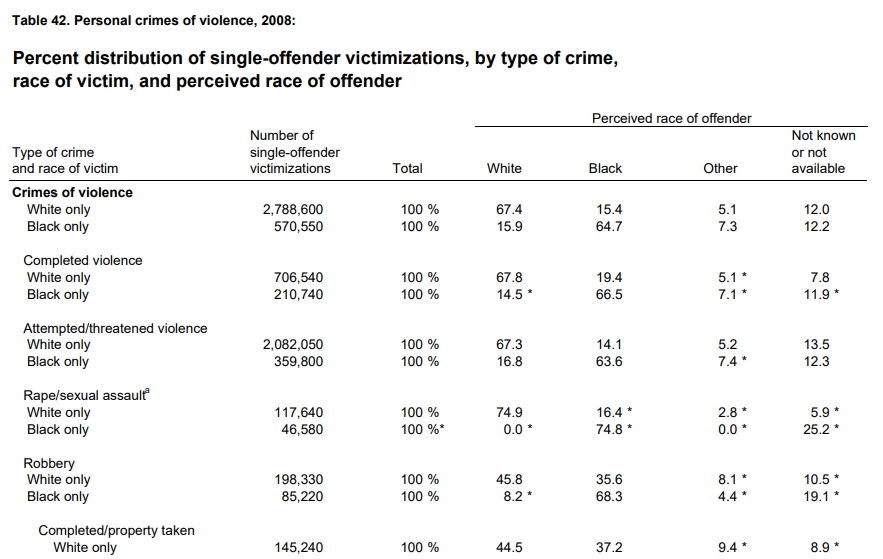 The data in it comes from the National Crime Victimizations Survey, which is conducted every year. So this is victim reports, nothing to do with arrests or convictions.

How many black victims of rape and sexual assault reported a white perp? Well, Table 42 says zero. Only one household in three thousand gets sampled for this survey, though; so that zero just means the number reported is too small for the sampling math to get anything meaningful from.

With that and some other slight qualifications aside, Table 42 is a pretty nifty reference on interracial crime … Except that the "is" there should be "was": The Bureau of Justice stopped publishing Table 42 in, let me see … oh, 2008 was the last year. How strange!

The BJS still publishes tables from the NCVS data, but it seems that all sexual offenses have been thrown in under the general heading "violent victimization," with no separate tabs for the type of violence.

We can, of course, never know—nor even guess!—why that particular table, Table 42, was discontinued in that particular year. The public at large lost a useful source of information there, though. Will the present administration restore it to us? Or, if they will not, will they tell us why they will not?