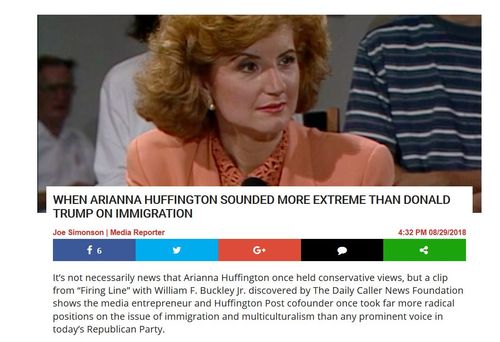 Brimelow, Arianna Huffington, And The 90s Immigration Debate—The Really Extreme Part Is That It Was About LEGAL Immigration.

It’s not necessarily news that Arianna Huffington once held conservative views, but a clip from “Firing Line” with William F. Buckley Jr. discovered by The Daily Caller News Foundation shows the media entrepreneur and Huffington Post cofounder once took far more radical positions on the issue of immigration and multiculturalism than any prominent voice in today’s Republican Party.

Huffington appears to take the most aggressive positions on the question of immigration throughout the debate. While others on the anti-immigration side of the panel, like far-right author Peter Brimelow, focus on specific data like census numbers, Huffington discusses deeper questions like American identity in seemingly racial terms, and says the United States can no longer “assimilate immigrants.”

“The last 30 years have changed our history and made us a kind of grey society,” Huffington says at one point during the two-hour debate.[More]

If you want to know what's really extreme (by Current Year standards) about the Firing Line immigration debate at Bard College, it's that it was about limiting or stopping legal immigration.

The debate subject was "Resolved: That All Immigration Should Be Drastically Reduced."

The thing is, if you  read VDARE.com instead of the Daily Caller, you would already know that--see Firing Line Immigration Debate Special: Twenty (!) Years Later. Full transcript, links, the lot.

You might also check out the late A. M. Rosenthal's 1995 attack on Arianna—by name—and on Peter Brimelow as well, not by name, as you'll see below:

On My Mind; Arianna, Go Home!

By A. M. ROSENTHAL

Arianna Stassinopoulos Huffington, if that's how you feel, go home! Love us or leave us!

And take some other immigrants with you—the kind that, like you, talk about how America should be worried about allowing more immigrants in. For instance, that British-born fellow, I forget his name, who is running around promoting his book about how he fears that in America his little son, the one he tells us has blue eyes and blond hair, will have to grow up among too many dark folk.

Arianna, for somebody like me, an immigrant himself, [VDARE.COM NOTE: An illegal immigrant:, Rosenthal was born in Canada, and was brought to the US during the Depression by his illegal immigrant father.] and still remembering what I was taught in civics classes about how America was built by people from all over the world, it is hard to be mean to another American just because she or he is an immigrant too. But that is exactly why I'm picking on you.[More]

What Rosenthal was saying was that if you were an immigrant yourself, you were wrong to ever oppose any future immigration. But if immigrants are going to act like that, what does the Oath Of Allegiance taken at naturalization even mean?

More about Rosenthal and his illegal immigrant background--he was what they now call a DREAMer--here.