The Energizer Bunnies of open borders over at the State Department have long thought that bringing young foreigners to this country is a swell way to make friends for America on the cheap. In particular, the diplomats like welcoming college students, such as the 20,000 Saudis that the Bush administration promoted. Diplomats don’t worry that little citizen students might be displaced under the blowback of their brilliant policy initiatives; nobody in Washington cares about Americans any more.

(One problem is the auslanders like America so much that they don’t want to leave.)

Another hobby of Washington diplomats is to hook up young foreigners with American jobs, even during the current jobs depression in which youth are particularly hard hit.

One scheme favored by employers utilizes temporary work visas, which they laud as fostering good will, but are also conveniently profitable for business owners. The practice leaves our own young people unemployed while ripping off the foreign kids as employers charge them expensive room and board, which can leave the workers with only enough money to gt home.

The Denver Post article, linked below, mentioned near the end that “Nationally, there were 320,805 visas for all categories of J-1 visitors for 2010.” The program cost taxpayers $635 million last year, so we are paying to have foreigners displace us. 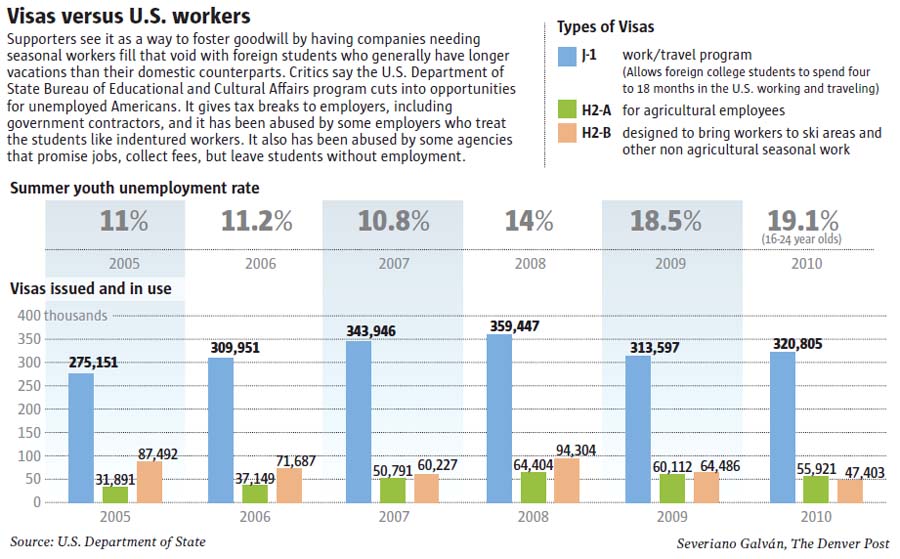 Colorado has the nation’s largest number of foreign students employed under a work/travel program on a type of visa called the J-1. Their duties include running cash registers at Rocky Mountain National Park, changing beds at Mesa Verde National Park and packing fruit at orchards on the Western Slope.

The J-1 work/travel visa, which can be traced to the 1960s Cold War-era Fulbright-Hays Act, was designed to promote “the interchange of persons, knowledge and skills in the fields of education, arts and sciences.” Last year, the program received $635 million in government funding for administration.

The work/travel visas allow foreign college students aged 18 to 28 to spend four months (or up to 18 months with extensions) in the United States working and traveling.

Backers of the program see it as a way to foster goodwill and a cheap and easy way for companies needing seasonal workers to fill that void with foreign students, who generally have longer vacations than their domestic counterparts. The foreign workers commit to stay with one employer for a specified time.

“When you take into account attrition rates and other issues with local workers, this (the J-1 program) makes our lives more comfortable,” said Bruce Talbott of Talbott Farms in Palisade. He employs 20 to 30 Russians, Latvians, Lithuanians and Taiwanese in his family’s packing shed each summer and fall in lieu of hiring locals who rarely last the entire season.

Critics of this program administered by the U.S. Department of State Bureau of Educational and Cultural Affairs say it cuts into opportunities for unemployed Americans. It gives tax breaks to employers, including government contractors, and it has been abused by some employers who treat the students like indentured workers. It also has been abused by some agencies that promise jobs, collect fees and leave students without employment.

“A high priority for our government at this time should be putting our people to work. It’s very nice to foster relationships and all, but that shouldn’t come at the expense of American workers,” said Ira Mehlman, spokesperson for the Federation for American Immigration Reform.

Another criticism is that what began as an educational and cultural program has evolved into a source of cheap labor for service industries. Scrubbing toilets and stocking shelves was not what the language in the founding legislation promised.

“We place workers in any entry-level jobs,” said Vadim Misnik, a native of Belarus whose seasonal staffing company places 800 to 900 foreign students a year in American jobs.

Misnik’s agency is part of a chain of organizations in a visa system that has 57 government-approved sponsorship agencies supplying workers for employers across the country. Those agencies interview and screen prospective J-1 workers, do the copious paperwork, collect fees and secure job guarantees. Countless agencies like Misnik’s work with the sponsors to link students to job openings.

Employers are required to pay the prevailing minimum wage to the foreign workers. However, many of the foreign-worker recruitment companies advertise through websites that the employers will be able to save money because they need not pay taxes or provide medical insurance.

Other guest worker programs like the H2-A visa for agricultural employees and the H2-B visa designed to bring workers to ski areas and other nonagricultural seasonal work, have onerous requirements. Employers must arrange for transportation, provide housing and advertise to prove they can’t hire American workers. There are caps on how many of these workers can be brought into the country each year.

That may explain, in part, why the numbers of the far-easier-to-negotiate J-1 visas issued nationally have been rising while the numbers of H2-A and H2-B applications decreased. There is no cap on the number of J-1s the State Department can issue in a given year.

At the same time, the summer U.S. unemployment rate for Americans aged 16 to 24 has risen from 11 percent in July 2005, to 19.1 percent last July. The measurement is taken in July because that represents the peak of seasonal hiring of youth.

The Council on International Educational Exchange, the oldest of the sponsor companies, placed 600 J-1 visa exchange students in national parks this summer, down about a third from 2007.

Xanterra, a Phil Anschutz-owned, Evergreen-based national park concessionaire, would not give numbers for the international workers it hires. Xanterra has concessions in Rocky Mountain National Park, Yellowstone and the Grand Canyon.

Company spokesperson Dave Hartvigsen said, “Frankly, we hire as much domestic staff as we can.”

Regional Park Service spokesperson James Doyle said his agency does not track how many foreign workers are in the parks because they work for the private concessionaires, not the Park Service.

In a statement released by his office, Sen. Mark Udall, D-Colo., raised questions about the visa program putting foreign workers in national parks while Americans are unemployed.

“Mark is concerned and checking into this issue with the Department of Interior to get more information,” wrote Udall spokeswoman Tara Trujillo.

The companies that supply workers to companies like Xanterra make the program sound problem-free. Online advertising is couched in language that is enticing to both workers and employers.

J1Jobs.com promises “thousands of U.S. jobs at the click of a mouse.”

Jobofer.org promises that “your business can actually benefit from hiring Exchange Students!” Among the listed benefits is savings on payroll taxes because employers won’t have to pay Medicare, Social Security and unemployment, or provide health insurance.

Another website, SeasonalStaff.org, adds up those benefits and tells employers they will save 7.79 percent on total payroll expenses for each J-1 worker. The site also promises “most of our students will be happy to work for sixty or more hours per week.”

The workers who take J-1 jobs must meet certain criteria that some proponents of the program say make them desirable workers. The J-1 workers must be full-time students in good standing, have a fairly good grasp of the English language and agree to leave the country within 30 days of the end of their employment, unless they receive an extension.

The students often go home empty-handed, according to some placement agencies, because the wages they are paid, combined with what they often must pay employers for housing and food, leaves only enough to pay for travel expenses and their way back home.

Those numbers do not please Mehlman.

“The federal government should not be an employment agency,” he said.

However, Talbott, who has been hiring J-1 students for about eight years, said he views the program as being a goodwill gesture because the students do learn from being in the country and from their interactions with other workers.

“My feeling is that the vast majority of this program is successful,” he said.