Border Trash Is Still Piling Up by the Tons

According to the elite liberal media like the New York Times, the illegal immigration invasion is over, so we can all forget about it and concern ourselves with the Superbowl, the Oscars and getting around to an amnesty for mucho millions.

Meanwhile, down on the physical border (not the imaginary one of MSM’s collective imagination), illegals keep coming, as shown by the mountains of trash which accumulate. The Arizona Department of Environmental Quality estimates border crossers dump 2,000 tons of trash each year. Local volunteers showed up recently to load up piles of trash for the dump. 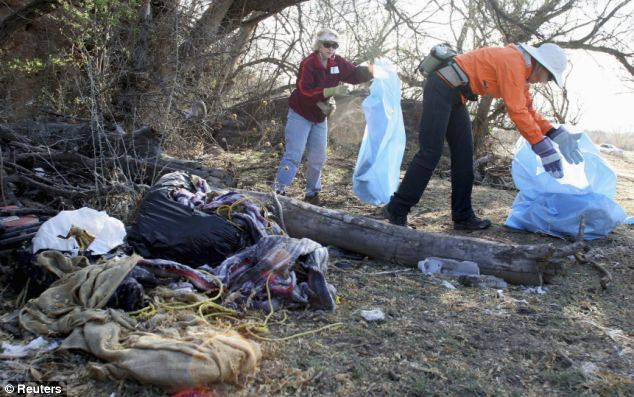 The government has its own website for the problem, Azbordertrash.gov, as if picking up the garbage of millions of foreign invaders were the most natural thing in the world. Another indication of Washington’s acceptance of border anarchy is the EPA awarding $103K last summer to the Tohono O’odham tribe to help remove aliens’ rubbish.

Picking her way into the desert brush, Raquel Martinez gathered scores of plastic water bottles tossed in an Arizona desert valley near the Mexico border, often by migrants making a risky trek into the United States across increasingly remote terrain.

“We need more bags … there’s so much trash,” said Martinez, one of scores of volunteers helping clean up the dry bed of the Santa Cruz River about 10 miles north of the Mexico border on Saturday.

Trash tossed by thousands of illegal immigrants as they chase the American Dream has been a persistent problem for years in the rugged Arizona borderlands that lie on a main migration and smuggling route from Mexico.

The problem was compounded as immigrants and drug traffickers responded to ramped up vigilance on the U.S.-Mexico border by taking increasingly remote routes, leaving more waste behind in out-of-the way and hard-to-clean areas, authorities say.

“Migants used to follow the washes or follow the roads or utility poles,” said Robin Hoover, founder of the Tucson-based non-profit Humane Borders.

“Now they’re having to move farther and farther from the middle of the valleys,” he added. “They end making more camp sites and cutting more trails when they do that, and, unfortunately … leave more trash.”

Those making the punishing march carry food, water and often a change of clothes on the trek through remote desert areas that can take several days.

Most is tossed before they pile into vehicles at pickup sites like the one getting attention on the outskirts of Rio Rico, from where they head on to the U.S. interior. [. . .]

Interestingly, a Mexico-friendly publication sniffed out this article and included a sympathetic add-on from the invaders’ perspective. Those backpacks are so heavy, they complain, or bandits make them leave a mess. According to the aliens, the mountain of trash is not their fault.

[. . .] As for the migrants, deportees at a shelter in Nogales, Sonora acknowledged that some illegal border-crossers willingly discard their trash in the Arizona desert, but insisted that in many cases, others are to blame.

For example, Ubence Flores, a migrant from Comayagua, Honduras, said that “polleros,” or migrant guides, make the crossers get rid of their belongings when they arrive at a scheduled pickup point. The pollero puts everything in black plastic bags, like those found by the river on Saturday, and then throws them in a truck to be taken to a dumping site, such as in the trees along the Santa Cruz River.

Bandits also force migrants to leave their belongings in the desert, said Henry Alberto Osorio, another Honduran migrant. In this common tactic, he said, bandits threaten migrants, who flee as fast as they can. Then the bandits pick through the abandoned backpacks for valuables.

But other times, the difficulty of crossing desert terrain for days on end proves too much for migrants.

“It gets so heavy, sometimes you say ‘I can’t carry this anymore,’ and leave it,” Flores said.