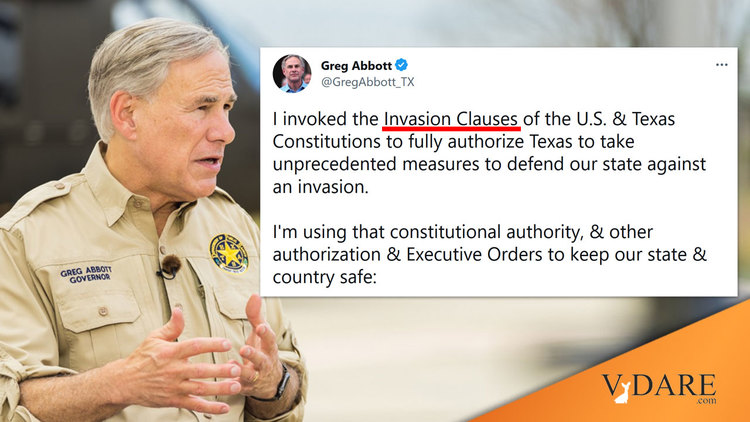 Texas Governor Greg Abbott has done what Kari Lake would have done had Arizona Democrats not stolen the governor’s election in the Grand Canyon State. Under his authority under the U.S. and Texas constitutions, Abbott declared that the illegal-alien invasion at the border is, well, an invasion.

Citing Article 1, Section 10 of the U.S. Constitution, and Article 4, Section 7 of the Lone Star Constitution, both of which empower him to repel an invasion, Abbott informed judges along the border of his plans:

I invoked the Invasion Clauses of the U.S. & Texas Constitutions to fully authorize Texas to take unprecedented measures to defend our state against an invasion.

What this means as a practical matter—he declared that cartels are terrorist organizations in September and began wall construction last year—isn’t clear. But it does appear to be more than tough talk.

The three top items: The Texas National Guard will repel and turn back illegals, authorities will arrest illegals caught inside the Texas, and gunboats will defend the Rio Grande.

This has been building for some time, apropos of his Operation Lone Star. In July, four counties declared an invasion under Section 4 of the federal Constitution. Legal celebrity Jonathan Turley said the designation is untenable because invasion means “an actual foreign invasion in the form of an army, an organized force.”

Abbott and his attorney general, Ken Paxton, clearly don’t agree. Thus, his declaration. The question is what the kritarchs will say when the Treason Lobby files lawsuits, and whether Abbott has the stones to ignore their injunctions.

That’s the legal war that immigration patriot governors must wage if they’re to stop the Great Replacement.