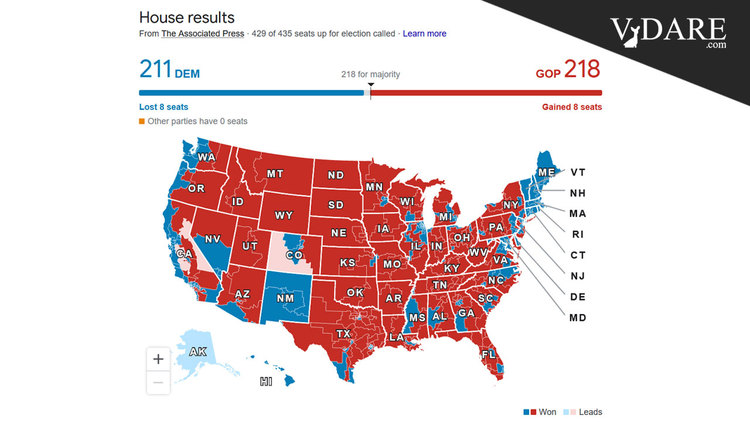 One of the puzzles in this year’s surprising and unpredicted (including by me) off-year election results is why the Republicans’ 51% to 47% win in the popular vote for House of Representatives did not produce a majority bigger than the apparent 221-214 result. (All numbers here are subject to revision in line with final returns.)

Popular vote totals for the House have the complicating feature that 36 of the 435 elections featured an unopposed candidate (24 Republicans were unopposed and 12 Democrats). I don’t know how to adjust for that.

One answer is differential turnout. In 2012, Democrats’ popular vote edge owed much to heavy black turnout to reelect the first black president. But many of those votes came in overwhelmingly black districts and did nothing to elect Democrats elsewhere.

This year, differential turnout worked against Democrats. Central city turnout was way down, as compared to the last off-year election in 2018 — down 19% in New York City but up 0.3% in the suburbs and upstate; down 13% in Philadelphia, but up 8% elsewhere in Pennsylvania; down 15% in Detroit’s Wayne County, but up 6% elsewhere in Michigan; down 12% in Milwaukee County, but up 1% elsewhere in Wisconsin; down 24% in Chicago’s Cook County, down only 8% in Chicago’s collar Counties and downstate.

In particular, Democratic mapmakers and supposedly nonpartisan but liberal-leaning redistricting commissions have no longer felt bound by the Voting Rights Act to pack blacks into black-majority districts — a tactic Republicans have encouraged since the 1990 election cycle because it leaves fewer Democratic voters in adjacent districts.

The 1982 Voting Rights Act says that blacks and Hispanics should be crammed into districts where nonwhite candidates have such a big edge that they are likely to get elected rather than some compromise white candidate with minority support. The VRA has been very good for black Democratic politicians, but not so good for the Democrats as a whole. There are in the outgoing current House 58 black Representatives (13.3% of the House), 56 of them Democrats.

But the VRA encouraged gerrymandering to make House districts black enough that even unattractive black politicians would win. E.g., Barack Obama lost badly to Bobby Rush in the 2000 Democratic House primary. After he came out of his depression, he realized he still had a career path by running for statewide office because whites liked him.

The VRA slowed black ascent to higher offices by leading to a lot of Bobby Rush–style race men getting elected to the House who proved unappealing to statewide voters.

This worked for decades for the GOP, but, apparently, Democrats have decided to not worry about the language of the law anymore.

Abandonment of this supposedly immutable principle is responsible, for example, for the fact that Michigan elected zero black Democratic congressmen for the first time since 1952. (A black Republican was elected in mostly white, suburban Macomb County.) …

The most important reason for the Republicans’ reduced harvest of House seats has been a reduction in clustering. …

Meanwhile, Republican clustering has increased, in the wide open spaces between the Appalachians and the Rockies, from far-out exurbs, and in Wal-Mart and Dollar General country beyond.

You can see the evidence from which party won seats with supermajorities. In 2012, 71 Democrats and only 32 Republicans were elected to the House with 70% or more of the vote. …

This year, by my preliminary count, the 70-plus percent districts moved closer to parity — 58 Democrats and 39 Republicans. …

Thus, the Republicans’ 51% of the total House vote produced a disappointing number of House seats.

However, it also signaled a residual Republican strength. Republican House candidates had a hard time dislodging Democrats in marginal districts. But relatively few were weighted down by highly publicized endorsements of Donald Trump’s backward-looking insistence that the 2020 presidential election was stolen; the few identified with that view ran significantly behind the many who didn’t. …