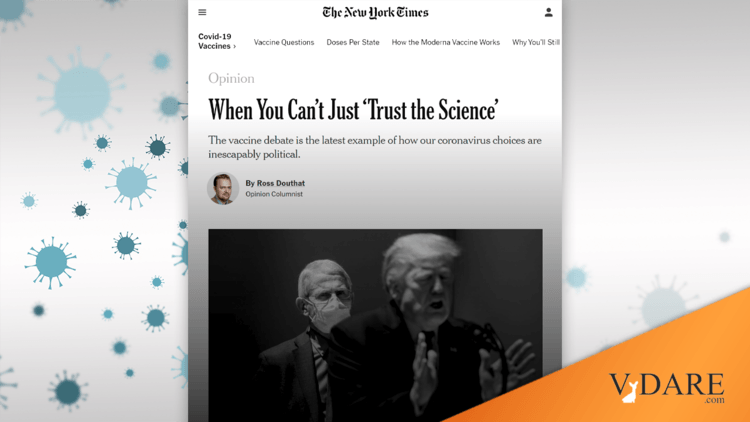 Bloc-Based Vs. Individual-Based Thinking On Vaccine Priorities: "Seniors Are More Likely To Be Privileged And White."

Earlier: (December 6) by Steve Sailer:  NYT: Too Many Whites Might Get Vaccine

From Ross Douthat’s column today in the New York Times:

Then there’s the now-pressing question of who actually gets the vaccine first, which has been taken up at the Centers for Disease Control and Prevention in a way that throws the limits of science-trusting into even sharper relief. Last month their Advisory Committee on Immunization Practices produced a working document that’s a masterpiece of para-scientific effort, in which questions that are legitimately medical and scientific (who will the vaccine help the most), questions that are more logistical and sociological (which pattern of distribution will be easier to put in place) and moral questions about who deserves a vaccine are all jumbled up, assessed with a form of pseudo-rigor that resembles someone bluffing the way through a McKinsey job interview and then used to justify the conclusion that we should vaccinate essential workers before seniors … because seniors are more likely to be privileged and white.

As Matthew Yglesias noted, this (provisional, it should be stressed) recommendation is a remarkable example of how a certain kind of progressive moral thinking ignores the actual needs of racial minorities. Because if you vaccinate working-age people before you vaccinate older people, you will actually end up not vaccinating the most vulnerable minority population, African-American seniors — so more minorities might die for the sake of a racial balance in overall vaccination rates.

But even if the recommendation didn’t have that kind of perverse implication, even if all things being equal you were just choosing between more minority deaths and more white deaths in two different vaccination plans, it’s still not the kind of question that the C.D.C.’s Advisory Committee on Immunization Practices has any particular competency to address. If policy X leads to racially disparate death rates but policy Y requires overt racial discrimination, then the choice between the two is moral and political, not medical or scientific — as are other important questions like, “Who is actually an essential worker?” or “Should we focus more on slowing the spread or reducing the death rate?” (Or even, “Should we vaccinate men before women given that men are more likely to die of the disease?”)

These are the kind of questions, in other words, that our elected leaders should be willing to answer without recourse to a self-protective “just following the science” default. But that default is deeply inscribed into our political culture, and especially the culture of liberalism, where even something as obviously moral-political as the decision to let Black Lives Matter protests go forward amid a pandemic was justified by redescribing their motor, antiracism, as a push for better public health.

By the way, why would a metric of maximally Reducing Deaths be superior to a metric of maximally Reducing Expected Life-Years Lost? Say one strategy would stop 25 people with a non-Covid life expectancy of one year from dying of Covid, while another strategy would stop one person with 30 years of life expectancy of dying of Covid. I could see arguments for both points of view …

Also, I could see arguments that we should be weighting helping the economy as well as saving lives or life-years. Are people with very short life expectancies big spenders at restaurants and bars? Well, some are, but in general …

One obvious flaw in this CDC paper is that its model of how to choose the order in which to vaccinate is ridiculous. It posits four huge blocs of Americans, running in size from 21 million (healthcare workers) to over 100 million (adults with health concerns) and then decides which giant blocs should go in which order: all healthcare workers, then all essential workers. Americans over 65 and Americans with health concerns will just have to wait patiently while all of the healthcare workers and all of the essential workers are inoculated

The quality of work by America’s numerous and well-compensated public health and bioethics “experts” on this problem has been very weak.