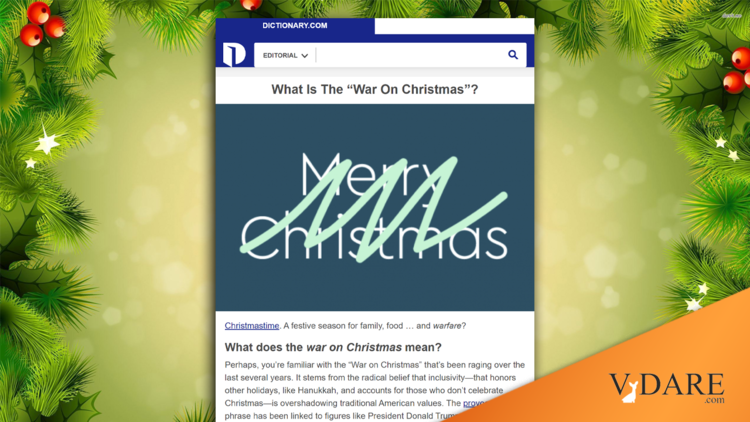 Dictionary.com Denying The War On Christmas With The Same Old Stuff

Earlier: The War On Christmas Goes On, With COVID-19 Piling On. And Christophobia Is Getting Worse

Dictionary.com, which sounds like an apolitical reference site, has an entry on the War On Christmas which includes all the media tropes which we've so often debunked and discredited:

What Is The “War On Christmas”?

Christmastime. A festive season for family, food … and warfare?

What does the war on Christmas mean?

Perhaps, you’re familiar with the “War on Christmas” that’s been raging over the last several years. It stems from the radical belief that inclusivity—that honors other holidays, like Hanukkah, and accounts for those who don’t celebrate Christmas—is overshadowing traditional American values. The provocative phrase has been linked to figures like President Donald Trump (remember “[People] don’t use the word Christmas … because it’s not politically correct. Guess what? We’re saying Merry Christmas again!”) and to silly controversies like the drawings printed on Starbucks coffee cups.

Well, according to the Pew Research Center, 92% of all Americans, regardless of religious background, celebrate Christmas in some form. Judging by numbers alone, it’s hard to believe this popular holiday is under serious threat. Christmas imagery still largely dominates the media and entertainment landscape in the United States....[Links in original, boldface added to highlight bias.]

Sure, it's just banned by your school and employer.

In the 1920s, Henry Ford—a known anti-Semite–distributed a series of pamphlets that claimed to expose the “whole record of Jewish opposition to Christmas” and other Christian holidays like Easter. A spike of religiosity in the ’50s (with church attendance at 50%) ensured that Christian values were included in the curriculum of most public schools. When people spoke out against this incorporation of church and state, they faced severe backlash.

Not severe enough, apparently.  Not nearly, by the way, anything like as severe as the Dissident Right is facing now.

In 2004, conservative commentator Bill O’Reilly revitalized the woeful “War on Christmas” for modern audiences. Although the phrase was apparently coined by author Peter Brimelow, O’Reilly launched it to new heights on his highly rated Fox News program. He also decried the phrase happy holidays, labeling it as anti-Christmas because he said it represented the marginalization of the holiday. Shortly after, another Fox News contributor released a book detailing the supposed “Liberal Plot to Ban the Sacred Christian Holiday.”

By the way, there are no actual links to external sources to prove any  of these assertions, the links above are just to other Dictionary.com pages on the words themselves. I suspect this of being plagiarized from Snopes.

Now in 2020, the “War on Christmas” has resurfaced as a criticism of COVID-19 restrictions and health department suggestions to avoid gatherings. According to Representative Jim Jordan, “They tried to cancel Thanksgiving. Didn’t work! They’re coming for Christmas next.”

Let’s face it, the holiday season isn’t really about what’s printed on a cup of coffee. It’s not about how someone greets you in a shopping mall, whether that’s with Merry Christmas or Happy Holidays. Rather, in this time of such divisiveness, we should all strive to appreciate the common threads found in all winter celebrations: family, friends, food, tradition, and yes—gifts.

Well, maybe in a time of divisiveness, people shouldn't be attacking other people for putting up Christmas lights, but they did just the other day. See PowerLine’s blog post A Christmas Diversity Grinch, December 8, 2020, and from Canada's National Post Jonathan Kay: How humourless progressive puritans take offence at just about anything, December 12, 2020.

Remember, we here at VDARE.com didn't invent the War On Christmas, we're just fighting back.