Birth Tourism Is a Growing Business in Southern California

Traveling to the United States to plop out a US-citizen baby is not illegal. It is perfectly lawful to engage in birth tourism, which is promoted by the fundamental misunderstanding of the intent of the 14th Amendment, that any baby plunking on US soil results in an American, which is not what was legislated at all.

The only way now for citizens to fight against birth tourism businesses, which are often located in quiet suburbs, is to go after them for code violations, as happened in Chino Hills where anger has grown over the last few months. The large subdivided mansion generated a lot of traffic and at least one sewage spill.

The good news in this instance is that citizen complaints worked:

CHINO HILLS, Calif., Jan. 4 (UPI) — An alleged “maternity hotel” in a California mansion was shut down after officials obtained a temporary restraining order against its owners, authorities said.

The building in Chino Hills, about 40 miles from Los Angeles, allegedly housed women from China who traveled to the United States to give birth to babies with U.S. citizenship, the Los Angeles Times reported.

City officials described the so-called hotel as a seven-bedroom house divided into 17 bedrooms and 17 bathrooms and said the owners did not obtain permits to remodel the property and were not allowed to operate a business in a residential zone.

Neighbors complained of cars speeding in and out of the driveway and a raw sewage spill from the house’s overloaded septic system. [. . .]

Unsurprisingly, a recent Los Angeles Times report had a lot to say on the business aspect of the practice, without much criticism (In suburbs of L.A., a cottage industry of birth tourism). 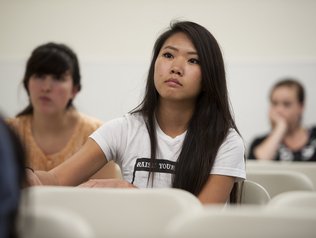 A more meaningful article appeared in September, featuring a young Taiwanese woman, Jennifer Shih (pictured), who is a birth tour beneficiary and whose story shows how foreigners can harvest enormous financial advantage from the stupid-generous American system, while they contribute zero. She was raised mostly in Taiwan and remains loyal to her home country. She returned to the US at age 15, but unlike demanding DREAMer brats (who claim to be Americans, just not legally), doesn’t pretend to even like America, because she doesn’t have to. The best she can say, after years of US-taxpayer-subsidized education, is that America has “more opportunities.”

Without legislative action (unlikely under King Barack), this practice is sure to increase. That means the current number of 200,000 annually will increase and create a growing moocher class, entitled to benefits that should go to non-loophole citizens.

Born in New York, Jennifer Shih, a UC Davis senior, attended high schools in Idaho and Utah before graduating from her alma mater in California.

But even she will tell you she is anything but an all-American girl.

Shih was reared in her parents’ home country, Taiwan, and returned to the United States at age 15, when it was time to claim her birthright as a U.S. citizen for a public education.

“I’m Taiwanese more than American,” Shih, who is 23 and double-majoring in communication and psychology, said on a recent weekday afternoon in Davis.

Shih personifies an immigration trend that can be seen as the mirror opposite of those teens and young adults who came to this country illegally as children and are now trying to secure legal residency.

Eight months pregnant, Shih’s mother legally entered the United States on a tourist visa in 1989. Two months after giving birth at a Manhattan hospital, she returned to Taiwan with her U.S. passport-bearing daughter in tow.

The family acknowledges it planned the birth so that Shih could become a U.S. citizen and eventually go to school here.

“The educational system in the U.S. is better and more open,” said Shih’s father, Simon, 55.

Critics call it “birth tourism” and the practice is solidly entrenched in the Los Angeles area, though so-called maternity homes catering to expectant mothers from East Asia are also advertised in the San Francisco Bay Area.

No one knows how many “birth tourists” visit this country each year.

In 2010, the mothers of 7,719 children born in the United States reported that they lived overseas, according to the National Center for Health Statistics – a figure up nearly 55 percent since 2000.

Critics say the data vastly understate the number, because they use information self-reported by parents during their hospital stays.

Jay Chang, who shuttles between Taipei and Los Angeles, serves as a consultant for nine maternity homes. Chang, 41, had his two children born through a maternity home over a decade ago. He argues that the practice is “in line with the spirit of the Constitution,” adding that the U.S. government was “getting a good deal.”

“We bring cash to pay for our births; we go back to our country to raise the child, and then he comes back to work and pay taxes to the U.S. government,” Chang said in Mandarin during a phone interview from Los Angeles.

Jennifer Shih has followed a similar path, attending public schools in Taiwan until her parents decided it was time for her to return to the United States in 2004.

“She was already fluent in Chinese, so now she could move on to English,” her father said. “Being bilingual will make her more competitive in the future.”

Simon Shih made arrangements with a family friend in Idaho to temporarily raise his daughter.

With little fanfare, on the night of her junior high school graduation, she said goodbye to family and friends, and boarded a 13-hour flight to a place she described as a “foreign country.”

“It was pretty scary,” she said. “It was my first time flying by myself.”

A growing industry
Pregnant women are driven to make the long and risky trip because of educational and job opportunities in the United States, Chang said. Some hope their children can help them emigrate later; once the children turn 21, they can petition the government to grant legal residency for their parents.

The trend is on the rise, Chang said, adding that there are more than 40 maternity operations that host 1,000 women in the Los Angeles area alone.

With names such as Star Baby Care and Little Sunshine, the homes are scattered across the suburban cities of Monterey Park and Temple City. Most operate in the shadows, advertising in Chinese newspapers and on the Internet. A quick online search of “giving birth in America” in Chinese yields numerous businesses, including Chang’s.

For $3,000 to $6,000 a month, the maternity homes provide three meals a day, transportation and child care, according to Chang. They even make arrangements with Chinese doctors in the United States who charge $7,000 for a birth.

The birthing centers can be a headache for local officials, who sometimes field complaints about traffic in residential neighborhoods. In Temple City, Public Safety Manager Robert Shagun said the maternity homes are “everywhere.” Since January 2011, the city has shut down five of them.

“There is nothing illegal about six, seven or eight pregnant women living in a house,” he said. But the city has relied on building codes and zoning laws to shut down the homes, he said, because owners have a tendency to add walls so they can accommodate more women.

“It’s kind of like a pot-growing house. You don’t know until you find it,” he said.

Birth tourism falls into a gray area of federal law. It is legal, of course, for foreigners to give birth in the United States. But women coming here for that purpose often lie on their visa applications, saying they are traveling for pleasure or to visit family.

“The question is whether or not people are lawfully obtaining a visa and appropriately representing the purpose of their visit,” said Virginia Kice, a spokeswoman for U.S. Immigration and Customs Enforcement.

Lying to immigration officers is a federal crime, Kice said, but is difficult to prove. She said that to her knowledge no one has been prosecuted in California for visa fraud in relation to birth tourism.

Mark Krikorian, executive director of the Center for Immigration Studies, a Washington, D.C., group that supports tighter immigration controls, is among those who argue for restrictions to help guard against the practice.

“What we’re doing is conferring citizenship on people who don’t have a connection to this country,” he said.

Krikorian and others argue that the United States’ conferment of citizenship at birth, adopted through the 14th Amendment in 1868, was established to ensure that newly emancipated slaves would be citizens.

“The idea that visitors from abroad who intentionally come to give birth to U.S. citizens would have been considered absurd by the framers of the amendment,” Krikorian said.

The United States and Canada are the last two developed countries that grant birthright citizenship. The United Kingdom phased out the policy in 1983, while Ireland did so in 2005 through a referendum.

Some advocates for stricter immigration controls have lobbied to have the 14th Amendment repealed – an action Krikorian believes may be “too drastic.” He suggests a middle ground: that if a child born to foreign parents in the United States was still living in the country 10 years later, he or she would be automatically naturalized.

Immigrant advocates counter that the birth-tourism issue is too small to warrant the government’s attention.

“Any effort to try and control it leads you down some pretty drastic policy and constitutional changes,” said Angela Kelley, vice president of immigration policy at the Center for American Progress, a progressive Washington, D.C., think tank.

“How realistically could you regulate it?”

Tough road worthwhile
For Jennifer Shih, the journey has been worthwhile, if not always smooth. She didn’t speak English when she returned to the United States as a teenager, and was unfamiliar with its customs.

Even after eight years, she said, she still “thinks about Taiwan every day.” There is rarely a year she doesn’t go back to visit.

She recalled the culture shock of when she returned to the states in 2004. Taiwan is a Confucian society, where deference to elders is paramount. In America, “my friends would be disrespectful to their parents,” she said. “They would call their parents by name, and that was OK.”

She began her new life with a family friend who owned a Chinese restaurant in a small Idaho town. After a year, she moved to Utah to live with relatives, and then, entering her senior year in high school in 2007, she settled in the Bay Area city of El Cerrito with her father, who emigrated to California after retiring from the Taiwanese air force to work as a tour guide.

The move was calculated so Shih could attend the University of California at in-state prices.

Looking ahead to her graduation from UC Davis in December, Shih said she was “grateful” to be born in the United States and hopes to continue life here. She recently started an event-planning internship at CBS Radio in Sacramento and hopes it will lead to a job.

Further out, Shih wants her own children to work and go to college in America.

“There are far more opportunities in America,” she said.