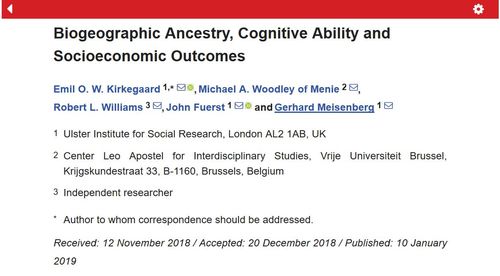 They found a database of 1,369 American kids, average age 11 or 12, for which they have both genes, allowing them to look racial ancestry (horizontal axis) and scores on an IQ-like test of cognitive ability (vertical axis).

In general, even among the new generation, there aren’t all that many people who are mostly white but partly black.

A couple of things to keep in mind is that these are children and the self-identification is probably done by their parents. Parents in mixed marriages are more likely, I imagine, to pick “Multi-Ethnic” for their children. In contrast, children can have strong opinions. For example, in 2010 President Barack Obama told the Census that he wasn’t white, just black.